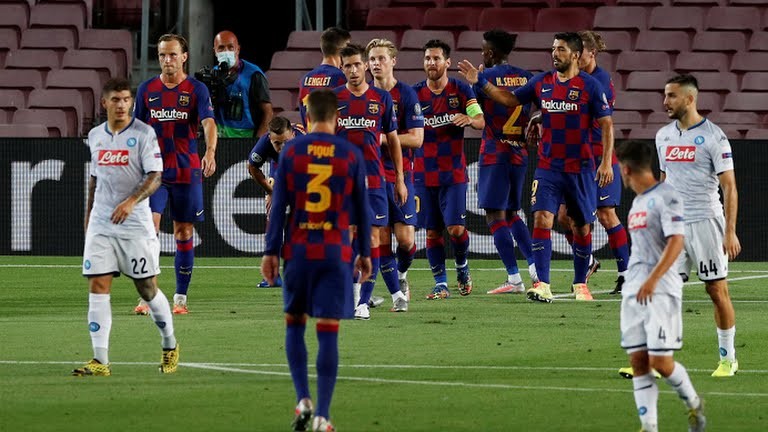 Lionel Messi and Barcelona had too much for Napoli to handle as the Catalans won 3-1 on Saturday to book their place in the Champions League quarter-finals.

The Partenopei became the 35th club against whom Messi has scored in Europe’s elite club competition, while they’re also the 13th he’s netted against in the last 16.

Napoli had actually enjoyed a brief spell of superiority before falling behind and Dries Mertens has the best chance to put them ahead.

Lorenzo Insigne fed a ball through to the Belgian, which ricocheted off Gerard Pique before falling to Mertens but he rushed his shot and sliced his effort off the outside of the post.

But the lead was taken by the hosts in controversial fashion. Clement Lenglet, looking for space in the box from a corner, shoved Diego Demme into Kalidou Koulibaly to free himself up, allowing him to head past David Ospina uncontested.

Then Messi showed why you can’t afford to pass up opportunities against even an out-of-form Barcelona. At the end of a move in which each of Barcelona’s 11 players touched the ball, the Argentine collected it wide on the right and drove towards goal. Despite being surrounded by four Napoli defenders and ending up on his hands and knees, the No.10 somehow wove his way through and curled a find strike into Ospina’s far corner.

Messi had appeared to bag his second with another fine goal. Frenkie de Jong found his captain with a sublime outside-of-the-foot pass and after controlling it with his chest and between lifting it over Ospina, the ball brushed his left arm, leading to the goal being chalked off.

The Catalans did get a third in the first half through a Luis Suarez penalty and Messi was again key. Just as Koulibaly was readying to clear the ball, he found himself being pickpocketed by the Argentine and booted the forward’s left foot as he was trying to make his clearance before the No.9 assumed responsibility to finish from the spot. Lorenzo Insigne reduced the deficit on the stroke of half time as he converted Napoli’s own penalty after Mertens had been brought down by Ivan Rakitic.

The Partenopei did well in the second half too and played out a relatively evenly matched contest.

Hirving Lozano should have reduced the deficit further just moments after his introduction but he headed off target when Insigne found him free and beyond Barcelona’s backline.

Fellow substitute Arkadiusz Milik thought he had given Napoli hope late on as he headed home a Mario Rui cross but he was narrowly offside and the goal was ruled out.