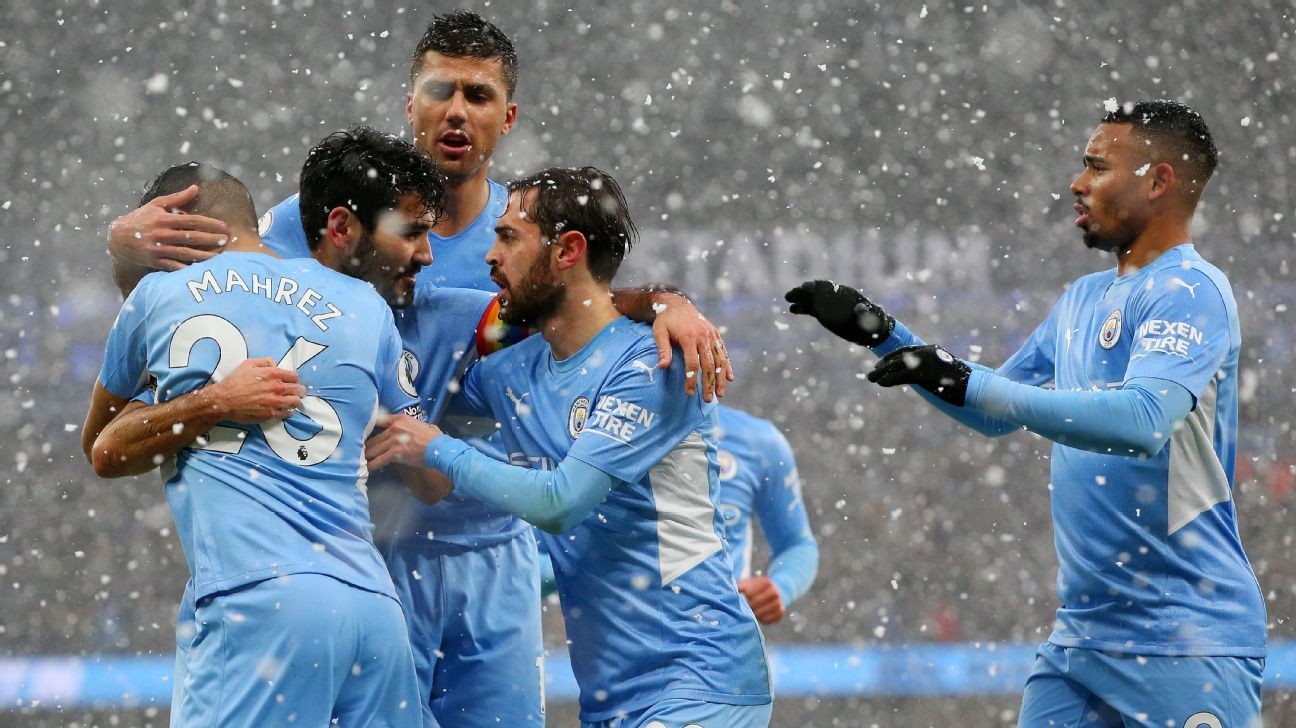 MANCHESTER, England -- Pep Guardiola wouldn't have needed to look far for an excuse if Manchester City had dropped points in the Premier League this weekend.

West Ham United arrived at the Etihad Stadium as the fourth-best team in the league, conquerors of Liverpool not so long ago. Four days after going toe-to-toe with Lionel Messi and Paris Saint-Germain, Guardiola was again without Kevin De Bruyne, Jack Grealish and Phil Foden and could only name eight substitutes, two of which were goalkeepers. The game was played in blizzard conditions so bad that half-time had to be extended to allow the pitch to be cleared of the snow, while visiting goalkeeper Lukasz Fabianski seemed happy to start the time-wasting as early as the first 15 minutes.

But in the end, none of it mattered. City won 2-1 and Guardiola's team showed again why Liverpool and Chelsea will be lucky to wrestle the Premier League title away from the Etihad this season. Can they do it on a freezing late November day in Manchester? Yes, they can.

"The first half was almost impossible to play," said Guardiola, who handed his personal man-of-the-match award to the ground staff who managed to get the game on when, 30 miles up the road, Burnley's game against Tottenham Hotspur had to be postponed.

"We have an incredible groundskeeper. Thanks to them we could play. The players we have out, those that came here were brilliant. All of them. We cannot forget which opponent we played. They have everything."

It wasn't a performance that will make the highlight DVD of dazzling displays under Guardiola, but maybe that was to be expected when the players can barely see the pitch markings for half the game.

There was the odd scare, particularly in the first half, when Michail Antonio and Said Benrahma tried to catch City out on the break and Guardiola was concerned enough during the final few minutes to throw on Fernandinho for some extra insurance. The 36-year-old Brazilian was brought on to stop West Ham nicking an equaliser but instead he put the game to bed with a side-footed finish from the edge of the penalty area in stoppage time.

After Ilkay Gundogan had put City ahead in the first half, it put the final touch on a performance full of enough grit to thaw out the road from Manchester to London. Fernandinho's goal turned out to be more important than it seemed at the time when Manuel Lanzini hooked an effort into the top corner with the last kick of the game. It made the game seem tighter than it was and the scoreline might have been a fairer reflection if City had taken a few more of their chances. Riyad Mahrez hit the post in the first half when he really should have scored.

After lifting themselves into the top four, West Ham have now lost two in a row and face both Chelsea and Arsenal in the next three weeks. Champions League football is a realistic possibility but it remains a problem that Moyes seems to struggle away from home against the top teams. Since returning for his second spell in charge of the Hammers, he has not won any of his 12 away league trips to the Premier League's 'big six' clubs.

City, meanwhile, have another tough game on Wednesday against an Aston Villa side rejuvenated by Steven Gerrard but under Guardiola they have developed a habit of making even the sternest tests look relatively straight-forward. The snow didn't help West Ham and City are unlikely to be fazed by a trip to Villa Park even if the pitch is covered in blocks of ice. Guardiola would still have his players finding pockets of space.

"We came from a tough game in midweek against PSG and we knew exactly which team we faced today," said Guardiola. "The amount of chances we created, especially in the first half with the conditions, it was a huge victory for us.

"We didn't concede much and defended really well. Maybe we could make another speed but the weather conditions didn't allow us to do it. We celebrate today then go to Birmingham on Wednesday for Villa."

Guardiola's Champions keep rolling on, never mind what's thrown in front of them.