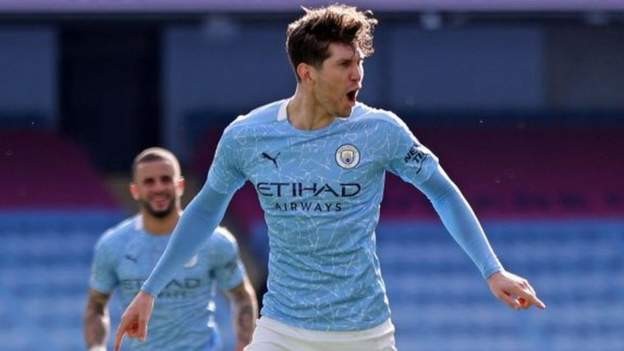 Manchester City extended their winning run to 20 matches and moved 13 points clear at the top of the Premier League as John Stones' second-half strike was enough to seal victory over a resilient West Ham United.

Stones fired home his fourth goal of the season from Riyad Mahrez's neat lay-off to keep Pep Guardiola's side in control of the title race.

Fourth-placed West Ham gave City a decent game at Etihad Stadium and fought back to level through Michail Antonio before the break, after Stones' central-defensive partner Ruben Dias had put the hosts in front.

But Guardiola, likened to celebrity chef Heston Blumenthal by Hammers counterpart David Moyes before Saturday's fixture, once again came up with the right ingredients as his side improved following the second-half introductions of Gabriel Jesus and Phil Foden.

City's unbeaten record now stretches to 27 games and they will equal their longest run without defeat under Guardiola if they do not lose against Wolves on Tuesday.

After about 20 minutes, City midfielder Kevin de Bruyne lined up a free-kick, about 40 yards out, to the right of the West Ham box.

The execution was terrible - the ball barely got off the ground and ran straight into the wall, allowing the visitors to clear. It was a notable moment because it was so unusual.

What De Bruyne did with another crossing opportunity from a similar position not long afterwards was more in keeping with the Belgian's normal standards.

Delivered with his left foot, the ball curled towards goal, too far out for stand-in West Ham keeper Darren Randolph to come for, and begged Dias to head it home.

It was De Bruyne's 11th assist of the season - equal with Tottenham's Harry Kane - and proved to be a rare moment of inspiration for a City side well shackled up to that point, with the returning Sergio Aguero barely having a touch.

The Argentina forward has been beset by a series of setbacks since last summer.

He made it to the second half this time around after being replaced at the break on his last Premier League start, also against West Ham in October.

But the 32-year-old was off the pace and did not react quickly enough to tap home a De Bruyne cross on City's last attack before he was replaced by Gabriel Jesus after an hour.

Beaten but not broken Hammers

They may have been beaten but West Ham did enough to show there is substance behind their drive towards the top end of the Premier League this season.

Jesse Lingard's arrival on loan from Manchester United during the transfer window has added another attacking element to their play and restored the 28-year-old forward to the form that brought him England recognition.

Lingard had a powerful shot blocked by Stones and it was his misdirected effort that was turned home by Antonio to pull the Hammers level.

Considering it was the first time an opposition player had scored at the Etihad since Mohamed Salah's penalty for Liverpool on 8 November, it was no mean achievement.

There were moments when it appeared West Ham might take it further as the pace of Lingard and Antonio, allied to the midfield industry of Declan Rice - who Guardiola said he admired in the build-up - caused anxiety in the home defence.

Antonio hit a post just before he scored and, in injury time, Issa Diop had goalkeeper Ederson scrambling to reach a header that bounced narrowly wide.

City eventually found a winner though, just as they have done every other time they have played West Ham at home with Guardiola in charge.

Moyes' side are now relying on Manchester United avoiding defeat at Chelsea on Sunday to preserve their place in the top four.

Manchester City are next in action on Tuesday when they entertain Wolverhampton Wanderers in the Premier League (20:00 GMT). West Ham's exit from the FA Cup means they are spared a rearranged midweek game and now have a nine-day break before the host Leeds United on 8 March (20:00).

Attempt missed. Issa Diop (West Ham United) header from the centre of the box is close, but misses to the right. Assisted by Jesse Lingard with a cross following a set piece situation.

Fernandinho (Manchester City) is shown the yellow card for a bad foul.

John Stones (Manchester City) wins a free kick in the defensive half.

Jesse Lingard (West Ham United) wins a free kick in the attacking half.

Phil Foden (Manchester City) wins a free kick in the defensive half.

Jesse Lingard (West Ham United) wins a free kick in the attacking half.