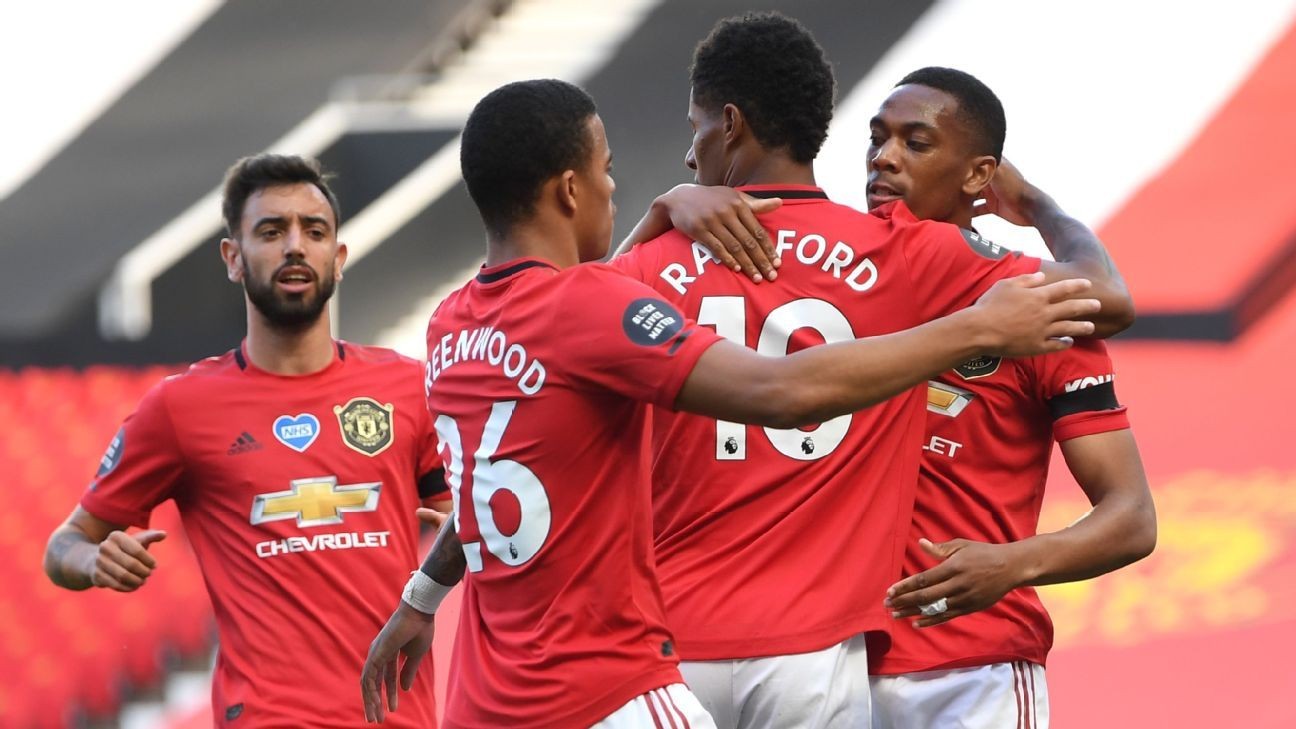 Manchester United are a year away from being a serious challengers for the Premier League title. That's not an opinion based on the progress made by manager Ole Gunnar Solskjaer with his squad in recent months, but a reality borne out by the numbers that tell you when a team is ready to become champions.

But forget the talk about this being a "young" United side -- Solskjaer's team may be blessed with the emerging talent of teenagers Mason Greenwood (18) and Brandon Williams (19), with both Marcus Rashford (22) and Anthony Martial (23) are still years from hitting their peak, yet they really are not a team of kids.

- Stream ESPN FC Daily on ESPN+ (U.S. only)
- Ogden: Will Glazers invest to bring glory back to United?
- Solskjaer: United return to top quicker than expected

Solskjaer has named the same starting XI for each of United's last five games -- injury to Luke Shaw ensures that run is likely to end at Crystal Palace on Thursday -- and its average age is 24.9 years. At 31, midfielder Nemanja Matic is the oldest member of that side, with Greenwood the youngest. What history shows us is that an average of 24.9 years is not quite old enough for a title-winning team, but isn't far off.

Back in 1995-96, when former Liverpool captain Alan Hansen infamously dismissed United's title chances by saying "you can't win anything with kids" after an opening day defeat at Aston Villa, Sir Alex Ferguson's side eventually sealed a Premier League and FA Cup Double with the 11 players making the most league appearances that season averaging out at precisely 25 years old.

United had plenty of kids in that side -- Ryan Giggs was 21 at the start of the season, David Beckham, Nicky Butt and Gary Neville were all 20 -- but they also had Peter Schmeichel (31), Denis Irwin (29) and Eric Cantona (29), as well as the 34-year-old captain Steve Bruce. Ferguson's young stars dragged the average age of the team down to 25, which is only marginally older than Solskjaer's side, but winning the title with an average age of 25 has proven to be an anomaly.

And judging by some of the teams that have won the title since the Premier League began in 1992-93, this current United side needs another year's experience at least before hitting the optimum age of a championship-winning line-up.

Jurgen Klopp's Liverpool team have been crowned champions this season with the average age of their 11 most-selected players 25.8 years old on the opening day of the campaign. Klopp has no player older than 30 in his first XI, with Jordan Henderson (29 at the start of the season) the oldest in that group, and Trent Alexander-Arnold, at 20, the youngest.

When Manchester City clinched a domestic treble last season, their most-selected 11 players started the campaign with an average age of 26.2 years.

Consider that figure when placed against Sir Alex Ferguson's final title-winning team at Old Trafford -- the one which Ferguson's successor, David Moyes, would claim to be an ageing side. United's 2012-13 champions started the season with an average age of 26.3 years, despite having the likes of Rio Ferdinand (34), Michael Carrick (31) and Patrice Evra (31) playing the majority of their games.

Arsenal's "Invincibles" that won the Premier League title unbeaten in 2003-04 had an average age of 26.3 years, although if the 25-year-old Edu (who made 30 league appearances that season) is replaced by 34-year-old Dennis Bergkamp (who made 28 appearances), the average age of Arsene Wenger's top 11 players would rise to 27.1 years.

But what is clear from the numbers is that Solskjaer's United are still in the process of maturing to the point of being able to challenge for the title. With the necessary additions to the squad, such as a centre-half with pace and another central midfielder, United can close the gap on Liverpool and City at the top of the table, but experience is still key and that only comes with time.

History suggests that title-winning teams enter a season with an average age of between 25.5 and 26.5 and Solskjaer's side will be in that area at the start of the 2021-22 season rather than the 2020-21 campaign, which is expected to begin in mid-September.

United are developing and growing, but the next 12 months will be crucial. If they make the right additions and continue to see the likes Greenwood, Rashford, Williams and Martial improve with experience, United could be ready to win the title again. Patience is required, yet that is the one commodity that no team or manager can ever take for granted.