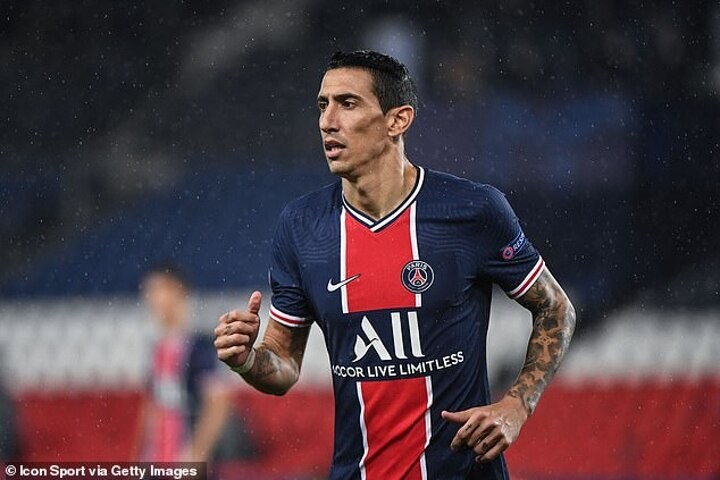 Manchester United supporters believe the club took a cheeky dig at former midfielder Angel Di Maria after featuring the Argentinian in a social media post to celebrate their win over PSG.

Marcus Rashford's late winner secured a famous 2-1 victory in Paris, with the likes of David de Gea shining in a solid team performance from Ole Gunnar Solskjaer's side.

The club's Instagram account used a picture of the Spaniard thwarting Di Maria, who failed to adapt after his £60m move to Old Trafford in 2014, with the caption: 'Big players step up in big moments'.

Di Maria spent just one season at United before joining the Parisiens and endured a difficult campaign as he scored just four times and struggled to deliver on his promise, and has had a tense relationship with supporters ever since.

And some fans were delighted with the post as a result, praising the social media account for 'throwing shade' at the 32-year-old, with one user writing: 'Wow, the admin are dissing Di Maria.'

And one supporter also claimed that the use of Di Maria in the picture was no coincidence.

'I think Manchester United’s admin knew what was going on when they posted this..... “Big Players Step Up In The Big Moments” Did Di Maria like that...'

The post garned a number of responses on Instagram, with some replying 'I see what you did there admin' and 'well played'.

There were no fans inside the Parc des Princes on Tuesday night, but Di Maria endured a negative reception from the United faithful when the two teams met in the Champions League knockouts in 2019 - with one throwing a bottle at him.

The ill feeling has continued over the years, with Di Maria claiming he never wanted to leave Real Madrid before joining United, hitting out at then-manager Louis van Gaal.

'I only stayed for one year. It was not the best time of my career, or rather I was not allowed to spend my best time there.

'There were complications with the coach at the time. But thank God, I was able to come to PSG and demonstrate again who I was.'

It wasn't just the player himself who was unhappy with his time in Manchester, with his wife Jorgelina Cardoso describing the city as 'a s***hole'.

'It was horrible! All of it was horrible,' she revealed this summer. 'When we left, I said to him, "Go to any country – except England". Anyway, one year later and there we were in England and it was horrible, a s***hole.'

Di Maria played 86 minutes of the game against United before being subbed for Pablo Sarabia. Since leaving United he has made 226 appearances for the French giants across a five year spell - scoring 83 times.

In that time he has won a staggering 12 trophies, but was left frustrated in the Champions League final this summer as his side were beaten by Bayern Munich.