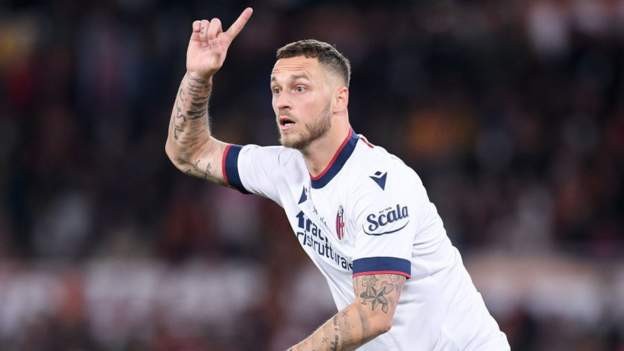 He dismissed the question, saying "250 players" had been linked with the club since he joined from Ajax.

However, it is understood Ten Hag sees the value in bringing in a player who worked with him and coach Steve McClaren at Dutch side FC Twente.

While United are pursuing longer term targets, such as 19-year-old Red Bull Salzburg forward Benjamin Sesko, the performance against Brighton underlines the need to bring in additions now.

Ten Hag picked Christian Eriksen in a false nine role against Graham Potter's side as Anthony Martial was ruled out by a hamstring injury and Cristiano Ronaldo was deemed not fit enough to start after featuring for just 45 minutes during pre-season.

With Ten Hag preferring to let Marcus Rashford and Jadon Sancho operate in wider roles, the need for a centre-forward is obvious.

And whilst the move for Arnautovic is a shock, he would bring a more combative element to the United attack.

His goals return during periods at Stoke and West Ham was a reasonable 43 in 184 appearances and he found the net on 14 occasions in 33 games in Serie A for Bologna last season.

United also have a recent history of buying strikers they would not normally be liked with, given Odion Ighalo was playing in China when he was brought to Old Trafford by former manager Ole Gunnar Solskjaer in 2020.

But his arrival would hardly improve the mood of fans who booed their team off after this afternoon's game and those who protested against the Glazer family before kick-off.