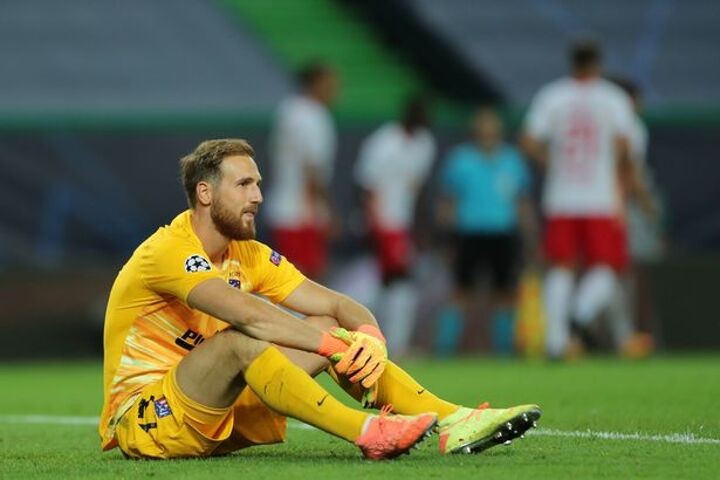 Atletico Madrid goalkeeper Jan Oblak has told Manchester United that he would welcome an approach from the club in the summer, according to reports.

Oblak is regarded as one of the best 'keepers in the world after starring for Atletico as they challenged for European and domestic honours in recent seasons.

The 28-year-old has been in Spain since joining from Benfica in 2014 and the suggestion is he would welcome a move to the Premier League.

According to ESPN, Oblak’s representatives are hoping to drum up interest from the Premier League’s so called ‘top six’, and United are among the clubs who have been made aware that the goalkeeper ‘would welcome approaches from England at the end of the season’.

United already have two impressive goalkeepers in the shape of Dean Henderson and David De Gea but the Spaniard is said to be keen to discuss his future with the club at the end of the season, having slipped behind Henderson in the pecking order.

There have even been reports that United would consider offering De Gea as part of a swap deal for Oblak, with the United goalkeeper starting his career at Atleti before moving to Old Trafford in 2011.

The Slovenian has a €120 million (£104 million) release clause and in the past Atleti were said to be demanding the full sum. But with Coronavirus leading to a huge loss of earnings for sides in the last 12 months, the La Liga league leaders may accept a smaller fee.

Oblak has admitted that he views the Premier League as having the best teams in the world and was asked about a potential move to England earlier this month.

He told BBC Radio 5 Live's Football Daily podcast : "The Premier League has strong teams. Maybe the strongest. But I think in the end it is what the coach is asking of you. You listen to his instructions.

"You are one of the 11, so you do what he asks of you. All the players on the pitch are thinking like that. It doesn’t matter if it’s the Premier League, Italian league, Spanish league, wherever you go you need to do what the coach is asking you to do."

When asked specifically about the possibility of a Premier League move, Oblak replied: "I don't know what the future will bring, but I am sure that in any league I would play in I could play well.

"I have now been in Spain for seven years. Let's see. I'm still young and I still have some years in front of me. The most important thing for me is the hope that I do not have a lot of injuries, and then we'll see.