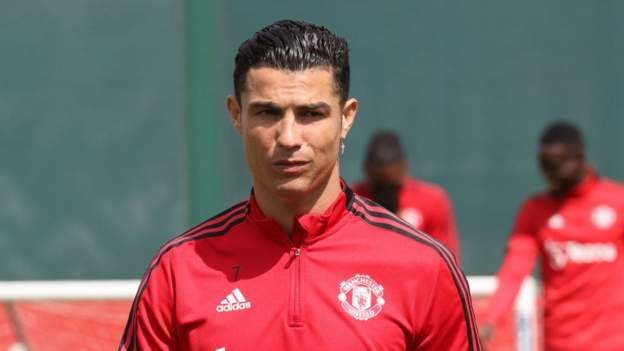 Manchester United expect Cristiano Ronaldo to be part of their squad next season despite reports linking him with Chelsea.

The Portuguese forward's agent Jorge Mendes met new Blues chairman Todd Boehly last week and Ronaldo was said to have been part of the discussionsexternal-link.

United sources feel there was nothing untoward in the meeting as Mendes advises a huge number of top players.

They are adamant that the 37-year-old is not for sale.

The five-time Ballon d'Or winner still has a year left on his Old Trafford contract and is expected to be a central figure in new manager Erik ten Hag's squad for the coming season.

Ronaldo was one of few players to escape severe criticism at United last term.

However, although he finished third in the Premier League's Golden Boot standings with 18 goals, there were claims that his presence prevented United from adopting a high-pressing game, which contributed to their dismal form.