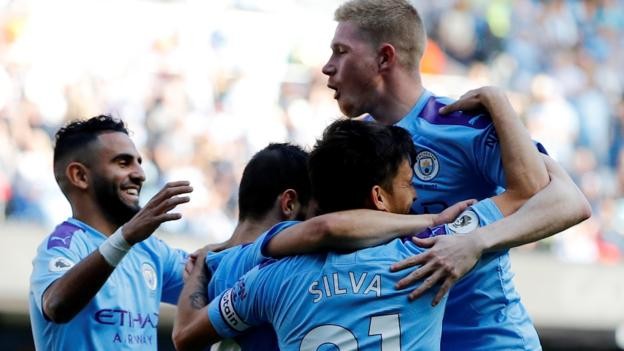 Five goals in the first 18 minutes set Manchester City on their way as they ripped apart a woeful Watford team to cut Liverpool's lead at the top of the Premier League to two points.

City had already bounced back from last weekend's humbling by Norwich with a clinical Champions League win at Shakhtar Donetsk on Wednesday, but this was a timely reminder of their ruthlessness and attacking power.

Bernardo Silva scored a hat-trick as Pep Guardiola's side ran riot to clinch their biggest league win since he took charge in 2016. They also hit the woodwork twice and continued to chase further goals until the end, but a record victory eluded them.

Manchester United's 9-0 win over Ipswich in 1995 remains the biggest victory in the Premier League era but City become only the seventh team to win a top-flight game by an eight-goal margin in the modern era.

City scored the opener after 52 seconds through David Silva before Sergio Aguero added a penalty and Riyad Mahrez struck via a deflection.

Bernarndo Silva headed the fourth and Nicolas Otamendi slid in the fifth. After the break City's intensity eased but Bernarndo Silva struck twice more and Kevin de Bruyne slammed in the eighth.

After David Silva got on the end of a brilliantly bending cross from De Bruyne to slide home from six yards, Watford almost hit back immediately. Gerard Deulofeu went round Nicolas Otamendi with an ease that will worry City boss Pep Guardiola, but saw his shot saved by an onrushing Ederson.

From then on, the home side took complete control - aided by a defensive horror show by the Hornets that saw them suffer an even bigger nightmare than when City hit them for six in the FA Cup final last May.

Ben Foster gave away a needless penalty when he rushed from his line to send Mahrez tumbling, with Aguero converting from the spot, and things quickly got worse for the visitors.

Mahrez made it 3-0 after 12 minutes when his free-kick deflected in off Tom Cleverley, and after 15 minutes it was 4-0 when more dreadful marking allowed Bernardo Silva to stoop and head home after Otamendi flicked on a corner.

Otamendi himself made it 5-0 shortly afterwards when he turned in Aguero's clever cut-back, before City gave their fans a rest from further celebrations - for a little while at least.

The onslaught continued after half-time when Bernardo Silva slotted home from a David Silva pass to make it 6-0, and he completed his first hat-trick for City when he converted another De Bruyne cross on the hour mark.

De Bruyne, one of the key orchestrators of this attacking masterclass, got his name on the scoresheet before the end too, casually smashing home City's eighth with five minutes left.

City's fans urged their team forward for more goals - and United's record - but for once on what was a painful afternoon for them, Watford's defence held out.

A reality check for Sanchez Flores

The only consolation for Quique Sanchez Flores, who was overseeing only his second game since being reappointed as Watford boss, is that his side do not have to play City every week.

After the high of his side's spirited second-half comeback to draw against Arsenal last week, this was a reminder of why they are bottom of the table, and winless so far this season.

Their miserable afternoon was summed up by the sight of Dimitri Foulquier trudging off on his Premier League debut as he was substituted after only 32 minutes, with his side already five goals down.

Sanchez Flores has work to do to lift morale before his side play more winnable games in weeks to come.

He finished with a goal and two assists but statistics do not do justice to the quality of his passing and crossing. Watford simply could not live with him.Bernardo's big day - stats

Manchester City's five goals after just 18 minutes was the fastest any side has gone 5-0 ahead in a Premier League match. Watford have lost their past 12 competitive games against Manchester City - their longest losing run against a single opponent. Manchester City's 8-0 victory against Watford was their biggest win in the English top flight. This was Watford's heaviest defeat in the top four tiers of English football and only the third time they've conceded eight goals in a league game (8-1 v Aberdare Athletic in January 1926 and 8-1 v Crystal Palace in September 1959). This is the first time an English top-flight side has scored 6+ goals in back-to-back meetings in all competitions with another top-flight club since Chelsea v Wigan in 2010. David Silva's opener was the fastest goal scored in the Premier League this season. Since his Man City debut in September 2015, Kevin De Bruyne has provided more Premier League assists than any other player (52). Sergio Aguero became the first player to score in seven consecutive Premier League appearances since Romelu Lukaku in December 2015.

Manchester City begin their defence of the Carabao Cup at Championship side Preston on Tuesday with Watford hosting another high-flying second-tier side, Swansea, on the same night (both 19:45 BST kick-offs).

Both teams are in action in the Premier League next Saturday. Watford travel to fellow strugglers Wolves (15:00 BST) while City have a trip to Goodison Park to face Everton (17:30 BST).

Attempt saved. Bernardo Silva (Manchester City) left footed shot from outside the box is saved in the centre of the goal. Assisted by Kevin De Bruyne.

Attempt saved. Andre Gray (Watford) header from the left side of the six yard box is saved in the top left corner. Assisted by José Holebas.

Attempt blocked. Tom Cleverley (Watford) right footed shot from the left side of the box is blocked. Assisted by Andre Gray.

Attempt missed. Kevin De Bruyne (Manchester City) right footed shot from the centre of the box is close, but misses to the left. Assisted by Sergio Agüero.

Angeliño (Manchester City) is shown the yellow card for a bad foul.

Andre Gray (Watford) wins a free kick in the defensive half.

Attempt saved. Rodrigo (Manchester City) right footed shot from outside the box is saved in the centre of the goal. Assisted by Bernardo Silva.

Attempt missed. Rodrigo (Manchester City) left footed shot from outside the box is close, but misses to the right.

Attempt saved. Gerard Deulofeu (Watford) left footed shot from a difficult angle on the left is saved in the centre of the goal. Assisted by Tom Cleverley.

Kiko Femenía (Watford) wins a free kick in the defensive half.

Riyad Mahrez (Manchester City) hits the bar with a header from the centre of the box. Assisted by Angeliño with a cross.

Eric Garcia (Manchester City) wins a free kick in the defensive half.

Attempt missed. David Silva (Manchester City) left footed shot from the left side of the box misses to the right. Assisted by Bernardo Silva.

Goal! Manchester City 7, Watford 0. Bernardo Silva (Manchester City) left footed shot from the left side of the six yard box to the centre of the goal. Assisted by Kevin De Bruyne with a cross.

Kiko Femenía (Watford) is shown the yellow card for a bad foul.

Rodrigo (Manchester City) wins a free kick in the defensive half.

Attempt missed. Sergio Agüero (Manchester City) right footed shot from the centre of the box is high and wide to the left. Assisted by Angeliño with a cross.

Attempt missed. Sergio Agüero (Manchester City) right footed shot from the centre of the box misses to the left. Assisted by Riyad Mahrez.

Attempt missed. Kevin De Bruyne (Manchester City) right footed shot from outside the box is too high from a direct free kick.