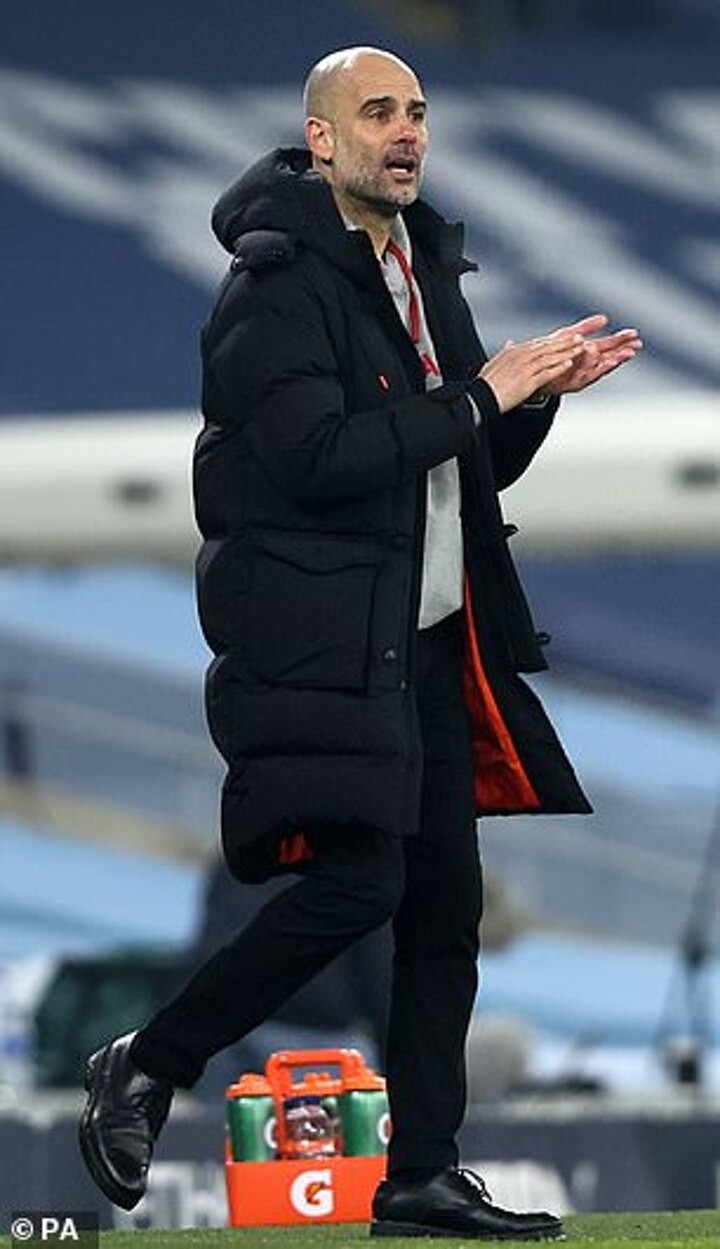 Manchester City welcome rivals Manchester United to the Etihad on Sunday afternoon in what is set to be a mouthwatering top of the table clash.

Pep Guardiola's side come into the derby in unstoppable form having won 21 matches on the bounce in all competitions.

They have the opportunity to move 17 points clear of United with another victory, one which would all-but secure a third Premier League title since Guardiola's arrival.

Though United have not been beaten in any of their last 10 matches in all competitions, they have won just two of six league matches, three of which have ended 0-0.

Form often goes out the window in these mammoth derbies, however, and having done the double over City last season, Solskjaer will be confident of pulling off a result.

With the intriguing match-up looming, Sportsmail takes you through the talking points and the important information you need to know.

City have been the dominant force in Manchester since the departure of Sir Alex Ferguson, but Ole Gunnar Solskjaer has fared well in his encounters with Pep Guardiola.

The pair have played against each other seven times in the last two-and-a-half years, sharing an identical record of three wins, three losses and a draw.

It was United who came out on top in the Premier League last season, winning both matches. But while they drew the reverse fixture at Old Trafford this season, it was City who knocked them out of the Carabao Cup at the semi-final stage.

Despite United's league success against City of late, Guardiola insists he does not fear Solskjaer's side.

'Scared is not the right word to explain when I approach an opponent,' he said in his pre-match press conference. 'I have incredible respect but I think at the same time, I can lose or I can win.

'We know the quality they have. I was really impressed with the way they played at Stamford Bridge, the intensity, the rhythm, high pressing, how brave they are in many aspects.

'We accept the challenge and want to do a good game to try and win.'

Solskjaer, on the other hand, was asked why he thinks the gap between United and City is so vast at the moment.

The Norwegian insisted it doesn't concern him right now, and noted at least one impressive run will come to an end this weekend.

'I don't worry. I can only control what's happening here at Man United,' he said. 'There are so many differences between the clubs.

'If it's the clubs you talk about I can sit here and talk about a lot. At the moment, they're the only team ahead of us so we want to claw back point one them and get closer to them.

'They've gone through a fantastic spell at the moment. Great form, 21 wins. We've have 21 away games in the league unbeaten so one record is going to be broken. Let's see which one it is.'

Manchester City have the chance to build yet more momentum when they play their great rivals on Sunday, and they have an almost fully-fit squad to choose from.

Pep Guardiola has confirmed that Nathan Ake remains their only absentee, with both Sergio Aguero and Kevin De Bruyne recently returning from injuries.

The Spaniard made six changes as City beat Wolves 4-1 last time out, and you can expect plenty more this weekend.

As for United, Solskjaer has confirmed that David de Gea is away in Spain for the birth of his first child, meaning Dean Henderson will start once more.

Meanwhile, the Norwegian has revealed he in unsure whether any of Paul Pogba, Donny van de Beek or Anthony Martial will be fit to play, after the trio all missed out on their stalemate with Crystal Palace on Wednesday.

Edinson Cavani, who returned to the side against Palace, will likely lead the line again.

However, neither Juan Mata or Phil Jones will be available.

With David de Gea absent, Dean Henderson has another huge opportunity to stake his claim as United's first-choice 'keeper.

Henderson has started just three games in the Premier League this season, conceding as many goals and keeping one clean sheet, which came in their most recent 0-0 draw against Crystal Palace.

The Englishman, who was phenomenal in back-to-back seasons for Sheffield United while on loan, has had to wait patiently with De Gea remaining Solskjaer's No1.

However, following his match-saving save in the dying moments against Palace, and with De Gea absent, he now has his chance to shine.

Though he is still just 23-years-old, the 'keeper has ambitions to be starting for England - who of course, have Euro 2020 coming up - and he won't settle for a back-up role for much longer.

With De Gea now 30, it's Henderson who is the future for United. But who knows, perhaps that future starts now.

Manchester City's crucial encounter with United - which kicks off at 4.30pm on Sunday, March 7 - will be shown live on Sky Sports Premier League and Main Event.

Sky Sports subscribers can also watch the game online by streaming it on Sky Go.

Having won 21 straight matches in all competitions, it comes as no surprise to any that Manchester City are the heavy favourites in Sunday's match-up against their bitter rivals.

Sergio Arguero, who has returned from injury, comes in as the favourite to score first at 10/3, while Edinson Cavani is at 9/1 for United.