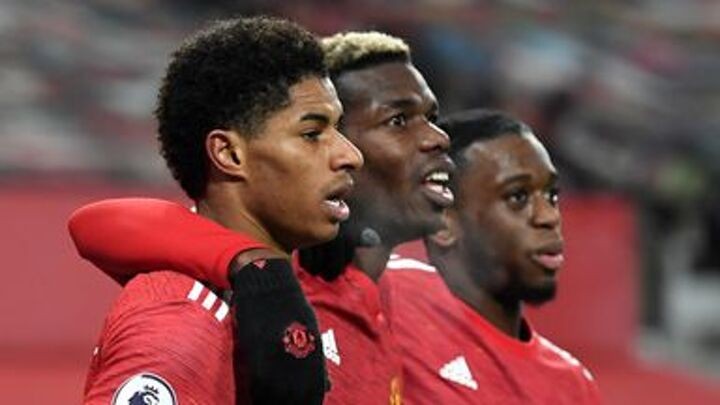 Manchester United are in a "false position" at the top of the Premier League and will drop out of the title race as the season progresses, according to former Liverpool midfielder Jason McAteer.

Ole Gunnar Solskjaer's side moved three points clear of defending champions Liverpool after a 1-0 win over Burnley on Tuesday night.

The top two sides will meet at Anfield on Sunday, live on Sky Sports, and McAteer believes United are fortunate to be league leaders heading into the match.

"As far as Manchester United sitting top of the table, I do think it's a false position," McAteer told Sky Sports News.

"Burnley gave them a tough game but they came through it and showed a bit of resilience. There is a bit of team spirit coming at Manchester United.

"But Ole hasn't dealt with what other teams have dealt with, in terms of a lot of injuries this season. He's had a lot of players to pick from."

United are unbeaten in 15 Premier League away games after their win at Turf Moor, with their last defeat on the road coming against Liverpool at Anfield in January, 2020.

Liverpool, meanwhile, are unbeaten at home in the Premier League since April, 2017.

McAteer is confident his former club will extend that run on Sunday and doubts whether United have the consistency to maintain their title challenge for a full season.

"Come the end of the season, I think Liverpool and Manchester City will be fighting it out. I think Manchester United will drop off," added McAteer.

"When you look at their results, when they have played the likes of RB Leipzig, Paris Saint-Germain, Manchester City and Arsenal, they haven't come through those games.

"It just tells me, when the big occasion comes, can Manchester United actually do it?"

Neville's message to Man Utd fans: 'Get carried away'

Gary Neville has refused to rule out Manchester United winning the Premier League after Ole Gunnar Solskjaer's side went top and encouraged United fans to "get carried away" ahead of Sunday's clash with Liverpool.

United's deserved 1-0 victory over Burnley has propelled them three points clear of champions Liverpool and top of the Premier League at the 17-game mark for the first time since their 2012/13 title-winning season under Sir Alex Ferguson.

It represents an astonishing turnaround for United since losing at home to Arsenal in early November and Sky Sports pundit Neville is relishing the situation - and the utterly unexpected sight of United above Liverpool in the league table.

"I don't think anyone is saying Manchester United will win the league but the fact that they are in a title fight…wow. I never would have imagined it," said Neville.

"It's a strange season. Why shouldn't Manchester United fans believe? Why shouldn't this side believe? Look at the front three, look at that midfield four, look at Bruno Fernandes - they have some fantastic players.

"The other teams aren't in great form. Man City are sitting there cool and calm, nobody is really talking about them, but they are hitting very good form and that is a real danger. But in the next few days it is time to have a little bit of fun. It won't be a comfortable few days for Liverpool."

Ole Gunnar Solskjaer is relishing Sunday's showdown with Liverpool and insists his players are ready for "a great test" after Manchester United claimed top spot in the Premier League.

Paul Pogba's deflected second-half volley secured a 1-0 victory over Burnley at Turf Moor that saw United open up a three-point cushion over the champions ahead of their clash on Super Sunday - live on Sky Sports.

"It's a brilliant position to be in," Solskjaer told Sky Sports. "Of course we know we're going to the champions who have had an unbelievable three-and-a-half-seasons, we know it's going to be a difficult game for us, but we are ready for it.

"We couldn't have asked for a better time to play them because we are in good shape, good form and hungry, which is a good thing because these boys want to get better and that's the test of their character and quality."