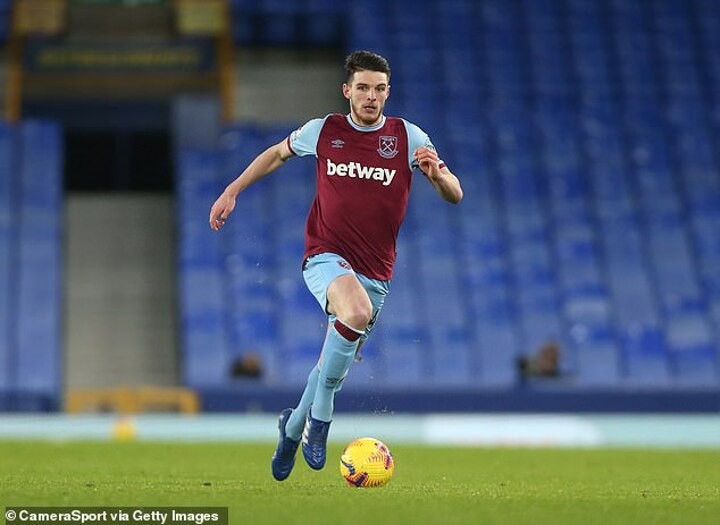 Manchester United are willing to battle Chelsea for the signing of Declan Rice in the summer, according to reports.

ESPN report Ole Gunnar Solskjaer is keen to continue rejuvenating the squad at the end of the season and will prioritise moves for a forward, central defender and a defensive midfielder.

And the same outlet reports Rice, 22, is among the options being considered for the latter, but obstacles remain to complete a deal with West Ham reportedly valuing the midfielder at £70million.

The report also states United acknowledge they are behind the Blues in the pecking order of clubs should Rice be allowed to leave in the summer.

Chelsea are the favourites to tempt him away from the Hammers, with the England star having been released by the Blues at the age of 14.

The report also comes nearly a week after reports in The Mirror that Rice has told friends that he is not interested in moving to Manchester and prefers a move back to Stamford Bridge.

Rice - who has made 19 appearances for the Hammers across all competitions so far this season - has a contract at the London Stadium that runs until 2024, with the club having the option to extend the deal for another year.

The same outlet states United are willing to spend big in the summer, though Ed Woodward has warned Solskjaer the club will still need to remain cautious due to the ongoing coronavirus pandemic.

The Old Trafford outfit could also look to sign a central midfielder in the summer, but the report adds that will hinge on whether Paul Pogba's future remains in Manchester.

The 27-year-old has 18 months left on his deal but has found real form since his agent Mino Raiola claimed his time at the club was over last month.

United are also doubtful over whether interested parties including Pogba's former club Juventus and compatriot Zinedine Zidane's Real Madrid could afford to sign him due to the financial slump caused by the pandemic.

ESPN also insist this month is not likely to be busy for United, particularly in terms of outgoings, though Marcos Rojo and Sergio Romero could leave, while Amad Diallo has arrived from Atalanta.