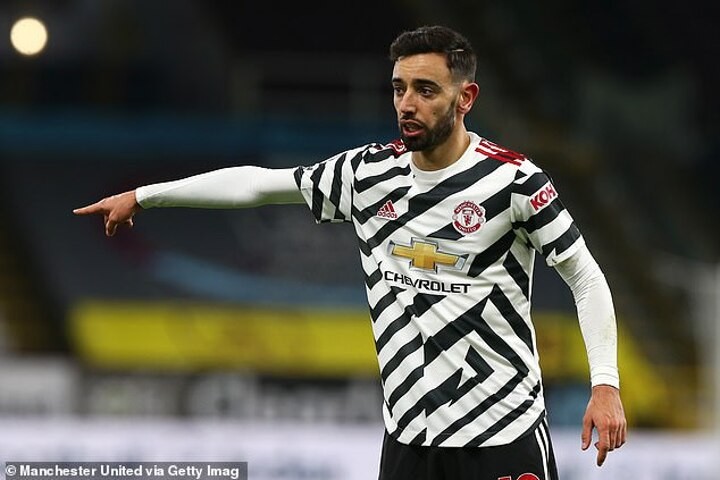 Bruno Fernandes insists the penalty row between Manchester United and Liverpool will be the last thing on his mind if he steps up to the spot at Anfield on Sunday.

Ole Gunnar Solskjaer has accused Jurgen Klopp of trying to influence referees by moaning that United have been awarded nearly as many penalties in two years under the Norwegian as his entire five-and-a-half year spell at Liverpool.

Fernandes says he encountered similar tactics from Benfica and FC Porto when he was a player at Sporting Lisbon, and won't be distracted if United win a penalty against their old rivals in Sunday's clash.

'I don't care,' said Fernandes, who has converted 15 of his 16 penalties for United. 'I'm not focused on what they are saying. Penalties are part of the game, for everyone.

'When you play for Sporting, Benfica and Porto, people are always talking about that kind of stuff, sometimes to put pressure on the referee. But the main point is if I take a penalty, I have to do my job. I saw Raheem Sterling has missed his last three penalties. So it shows it's not as easy to take a penalty as people say.'

Liverpool have been given 42 penalties under Klopp compared to United's 46 in less than half that time since Solskjaer took over.

Liverpool fans have also picked up on the fact that Sunday's referee Paul Tierney has awarded five spot-kicks to United and none to their team in his last 10 games in charge.

But Fernandes believes it is down to the pace and trickery of United's forwards rather than any bias.

He added: 'We have really quick players up front. Anthony (Martial) is one of the best players one against one in the box. Marcus (Rashford) is another one who is quick and has quick feet who can take the ball away from the defender in any moment.

'It's normal that sometimes because of that they gain penalties. People can say what they want.'

Jose Mourinho also waded into the penalty debate on Friday by summoning statistical evidence after Rashford claimed the Tottenham boss taught him how to win more penalties during his time at Manchester United.

'Stats,' replied Mourinho. 'Go to Opta, go to my history as a manager in my more or less 10 Premier League seasons. Compare numbers and take your conclusions.'

United have been awarded 27 penalties in 118 games under Solskjaer, according to Opta, compared to 19 in 143 games under his predecessor.