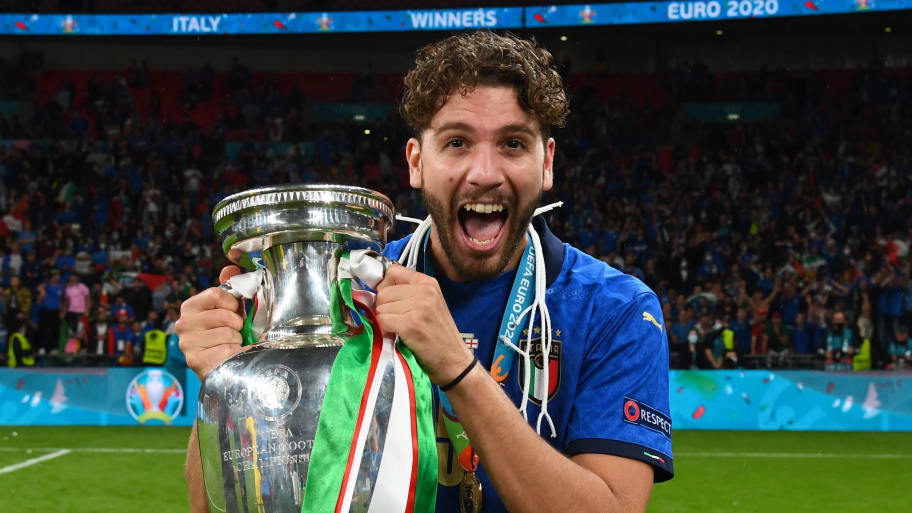 Arsenal have ramped up their pursuit of Manuel Locatelli with the Gunners tabling a £34m bid for the Sassuolo midfielder.

The Italy international was one of the stars of his country's triumphant Euro 2020 campaign, notching two goals against Switzerland in Roberto Mancini's side's second outing as Gli Azzurri secured top spot in Group A before going on to win their second European title.

Speculation had already started to circulate regarding Locatelli's future prior to this summer's European Championship, and his stellar showing at the tournament has only served to enhance such rumours.

Both Arsenal and Juventus have been credited with an interest in the 23-year-old, with Locatelli's desire to play Champions League football meaning the Old Lady are hot favourites to secure his signature.

However, that hasn't stopped Mikel Arteta continuing to pursue the midfielder, with Sky Sports Italia confirming (via the Evening Standard) that Arsenal have tabled a €40m (£34m) bid.

The bid was made public knowledge by the agent of Juve youngster Nicolo Fagioli - a player rumoured to have been offered to Sassuolo as part of a deal to bring Locatelli to Turin - and having revealed the offer made by Arsenal he then went on to deny his player had been offered as part of a deal.

"Juventus would like to sign Locatelli and Arsenal have already offered €40m (£34m)," he said. “But I can assure you that, as of today, Fagioli has not been included in the deal. Massimiliano Allegri wants to see him in training to understand if he can be useful during the season."

Returning Juve boss Allegri is desperately trying to freshen up his squad this summer despite being hindered by the club's ongoing financial woes.

As such, the Old Lady are unlikely to be able to stump up the sort of cash Sassuolo are demanding for their midfielder, meaning Arsenal's continued interest could have a happy ending should Locatelli decide he can do without Champions League football for at least one more season.

This article was originally published on 90min as Manuel Locatelli's agent confirms Arsenal have made bid.