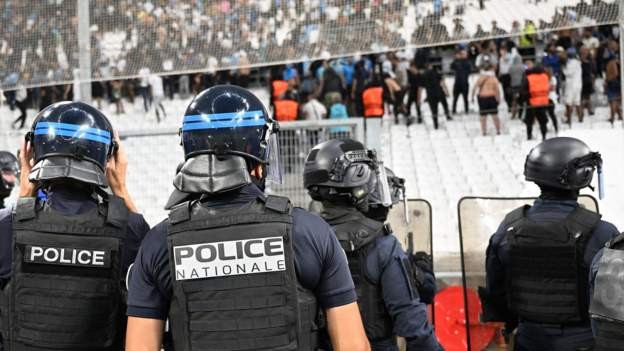 Marseille and Nice will play their next European home games behind closed doors as punishment for recent crowd trouble.

Nice, meanwhile, were punished after their Europa Conference League tie with Cologne on 8 September was delayed because of clashes between rival fans.

Marseille have also been ordered to partially close their stadium for the visit of Tottenham on 1 November.

Uefa said the punishment was for "lighting of fireworks, throwing of objects, use of laser pointers, crowd disturbances and blocking of public passageways".

Marseille's next Champions League home game is against Sporting Lisbon on 4 October, while Nice host Slovakian side Slovacko in the Europa Conference League on 13 October.

Nice have also been banned from selling tickets for their next away fixture for a number of offences including "racist behaviour, throwing of objects, lighting of fireworks and crowd disturbances".

Cologne, meanwhile, have been fined 100,000 euros (£90,000) and banned from selling tickets for their next two away games in Europe for "lighting of fireworks, throwing of objects and crowd disturbances".

Serbian club FK Partizan have been fined 20,000 euros (£18,000) and ordered to partially close their stadium for their next home game in Europe "for the discriminatory behaviour of its supporters" in their game with Nice on 9 September.

Eintracht Frankfurt have been fined 15,000 euros (£13,400) and given a partial stadium ban, which has been suspended for one year.

The German club have also been banned from selling tickets for their next away European fixture for racist behaviour, with that ban also suspended for one year.

Italian giants Juventus have also been handed a suspended partial stadium closure for one game and banned from selling tickets for their next European away fixture - also suspended for one year.

Both punishments have been given for the "racist behaviour" of some of their supporters in the Champions League tie with Paris St-Germain in France on 6 September.