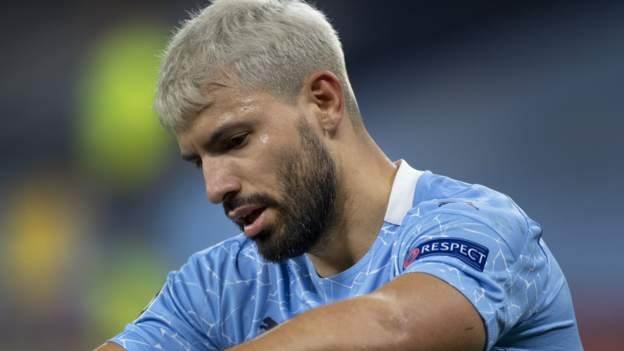 Manchester City will be without record goalscorer Sergio Aguero against Marseille on Tuesday and the striker could be out for a month.

Aguero, 32, playing just his third game since recovering from a knee operation, sustained a muscle problem and was taken off at half-time at West Ham in the Premier League on Saturday.

However, Fernandinho, Benjamin Mendy and Nathan Ake also miss the behind-closed-doors encounter at the Stade Velodrome

City, who have dropped points in three of their five Premier League games, now have problems in the centre forward position, with Aguero joining Gabriel Jesus on the sidelines.

Asked how long the Argentine - who had knee surgery in June - would be out, City boss Pep Guardiola said: "It depends on the injury. When it is minimum it will be 10-15 days. If it is longer it will be three weeks to a month. I don't know.

"When you are four or five months out (with) knee problems, always you have a risk when you come back.

"We tried to handle it as well as possible, just 50-55 minutes a game, but it was not enough to get fit for the next games. He will be back as soon as possible."

Entertainment data company Gracenote says Manchester City have 98% chance of progressing to the knockout stages of the Champions League.

Simon Gleave, head of sports analysis at Nielsen's Gracenote, said: "Manchester City's win against FC Porto last week improved City's chance of progress by 2% to 98% according to the Euro Club Index. There is now a 90% chance that City will win Group C."