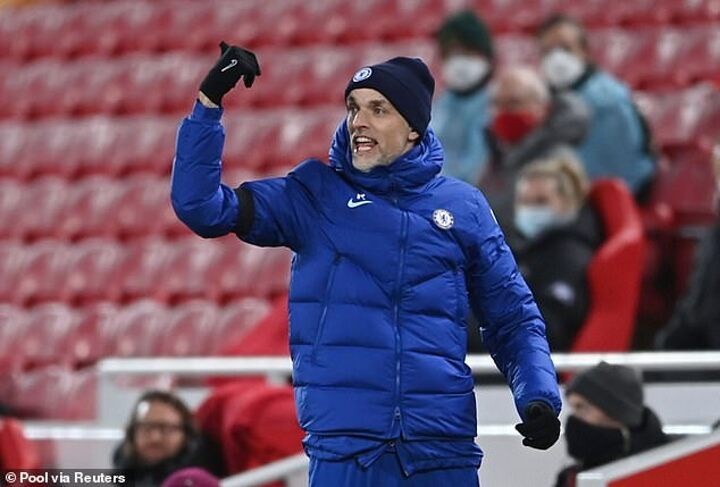 If Liverpool beat RB Leipzig next Wednesday would it count as a home win? Good heavens, they need one — even if it comes in Budapest at a venue that is only Liverpool's home by virtue of UEFA's nomination.

This was a fifth straight defeat at Anfield, and they haven't won there since December 16 against Tottenham. Liverpool were top that night, and looking ominous. Now, the worry is a League table that shows the champions divorced from the top four and just about clinging to Europa League status in seventh place.

Jurgen Klopp did not bother to play down the significance of this match, so cannot dismiss the seriousness of the outcome. There are good teams ahead of them, improving teams breathing down their neck.

And Liverpool aren't even the best team in Liverpool right now. Fulham visit Anfield next. It would have been considered a gimme. But so were Burnley, West Brom, Brighton and Everton — once.

As for Chelsea, this win returns them to the top four, which was what Thomas Tuchel was employed to do, short-term. It must be said, winning away against teams managed by Jose Mourinho, Diego Simeone and Klopp within his first two months is better than could fairly have been expected.

Thursday was another brave performance, keeping possession and playing out from the back, but never scared to hit Liverpool where it hurts.

A very honest chap, Tuchel. He as good as revealed his gameplan for beating Liverpool prior to the game.

Timo Werner was in the team for his pace, he said. Liverpool play a very high line and this gave him a chance to get in behind them. So: ball over the top to Werner. And he was true to his word.

In being so, he offered another clue to Liverpool's struggles this season. Injuries at centre-back, obviously. The 15 central defensive partnerships in 26 Premier League matches, without doubt.

Yet also, as often happens, teams get worked out. Their vulnerabilities are identified, picked apart: even the good ones. Leicester have a way of beating Manchester City. Sheffield United's clever strategies, their overlapping centre-halves, have been pulled to pieces.

And the champions? Well, even before the injury to Virgil van Dijk there were signs opponents knew more about how to get at them. In the six games before that fateful day at Everton, they had shipped 13 goals — including seven at Aston Villa and three to Leeds.

On Thursday night, it sounded, and looked, as if Tuchel had worked them out and was very open about it. He may be one of those people who can't lie. Ask him a straight question and get a straight answer: like when he watched Kepa Azpilicueta keep two clean sheets in succession, then immediately announced Edouard Mendy was the first-choice and would start the next game against Southampton. Which he did.

This was different. To announce what his team would be doing to combat Liverpool suggests there is an obviousness about the champions' frailty that is impossible to disguise.

In the tunnel, before emerging for the second half, Tuchel could be seen giving instructions to his players. Never has the gesture for long, over the top been more nakedly demonstrated.

It is amusing, really, how unselfconscious foreign coaches can be about long ball football. Sean Dyche or Sam Allardyce caught giving similar orders would be decried as dinosaurs.

Tuchel arrives with none of that baggage. When he tells Chelsea to go direct, he does so without moral dilemma. Fabio Capello, as England manager, would regularly implore his players to bombard the box if chasing the game. He wasn't averse to introducing Kevin Davies, either.

Arsene Wenger once stated that Emmanuel Adebayor gave Arsenal the option of, as he put it, playing differently. Translation: putting it in the mixer. They didn't do it often, but he wasn't ashamed when they did.

Nor is Pep Guardiola when Ederson plays 60-yard passes to create goals. He bought a goalkeeper whose kick was the talk of Europe.

This is no coincidence. Guardiola did not recruit a world-class goalkeeper, who was then revealed to have this secret weapon. He knew exactly what he was getting with Ederson.

Manchester City play the most delicate football on earth: the irony being they can also do primitive route one more expertly than any of their less sophisticated rivals.

Which, in a way, was what Chelsea did at Anfield. It wasn't Wimbledon at the original Plough Lane.

It wasn't Stoke. Chelsea can still mess it about at the back with the best of them. They still play a hundred short passes, sometimes infuriatingly so.