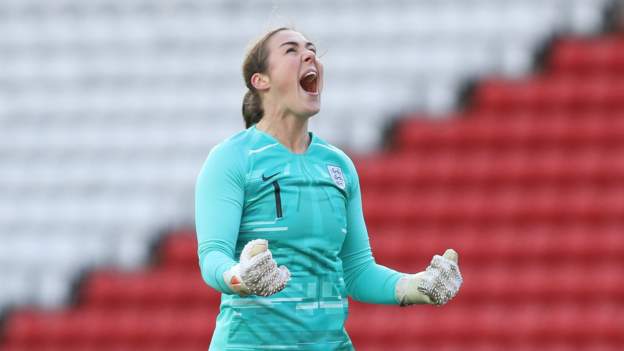 England manager Sarina Wiegman said goalkeeper Mary Earps "made the difference" in their 1-0 win over Austria at the Stadium of Light.

Earps, who has started every game under Wiegman, made two important saves early in the second half.

It was the first time in World Cup qualifying she has been tested and England have not conceded a goal since Wiegman took charge in September.

"It was 1-0 and she keeps the score at 1-0. That's so important. They were hard moments because she didn't have to do very much before - almost nothing - and it was really cold so she has to be concentrated.

"In the moment when there are these shots she has to be concentrated and explosive in this action. She can make the difference and she did."

The last goals England conceded were in a 3-1 friendly defeat by France back in April and they have scored 33 goals without reply in World Cup qualifying.

Saturday's narrow 1-0 win over Austria, courtesy of Ellen White's goal on her 100th appearance, ensured they maintained a 100% record in qualifying and Wiegman said she was "proud" of the progress made since she became manager.

"I'm very happy. Since we started in September, the staff needed to get used to each other," she added. "We worked on that to get the structure but I think we got close real quick and the team feels that too.

"The players who have come in have had such a history. The team has performed well in history already so we have very good players. We just added some details and some principles in the game and it really fits at the moment.

"I am really proud of the team now. [Austria] was one of the hardest games because when we weren't tight enough on the ball they were dangerous.

"We need to be exposed to top, top opponents which will occur in February then we can really see where we are."

England are hosting a new invitational, round-robin competition in February which will see them compete against Germany, Spain and a third opponent yet to be announced.

Both Germany and Spain are ranked inside the world's top 10.

The Lionesses travel to Doncaster on Tuesday for their next qualifier, taking on Latvia, who they thrashed 10-0 last month.