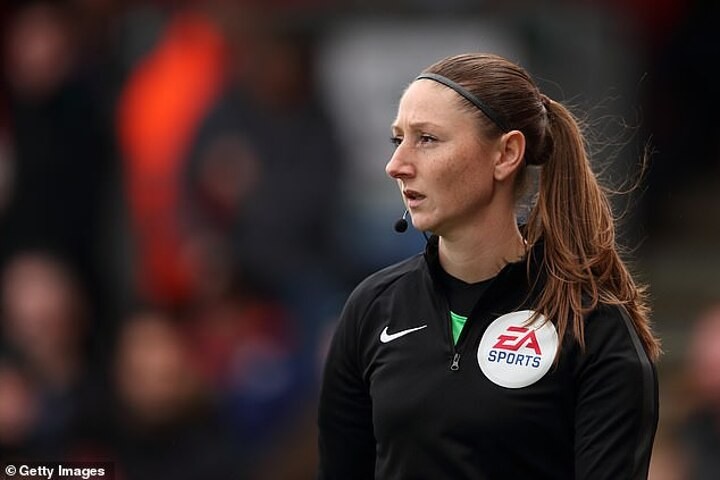 Premier League assistant referee Sian Massey-Ellis insists her concentration during matches is so high that she is able to blur out any abuse from supporters and also insisted he has never felt intimidated.

The assistant referee was in the spotlight at the weekend after an incident involving Sergio Aguero. The Manchester City striker put his hand on her shoulder after he disagreed with a decision.

Aguero will not face any retrospective punishment for his actions but was criticised by Match of the Day pundits Ian Wright and Alan Shearer as well as Sky Sports' Gary Neville - who called on the Argentine to apologise.

Official rules state that players can be cautioned for non-aggressive contact with a referee but can be sent off if it is deemed aggressive or confrontational.

Massey-Ellis, who is the only top flight female official, spoke about her experiences in the men's game during an interview with Outside the Box podcast.

She insisted she is able to block out noise during matches and said intimidation has never been an issue, instead sighting fitness as her biggest challenge.

'Everyone thinks “oh you must get loads of grief” but I don’t really because I’m so concentrated on communication, focusing on decisions.

'What goes on in the background is just a blur. People expect me to say that as a challenge but I don’t see it as that.

'I think fitness for me is a really big thing, I have to work really hard to be as fit as the lads and fast as the players. If I’m not in the right position to make an offside decision, if I’m not in line with the last defender, most of the time I will get it wrong.

'I think when I’m dressed in my uniform I’m just a woman in black. When you go on to that football pitch you can be confident, try to make them right decisions. If anyone is worried about getting shouted at, you don’t ever notice it. Grassroots football you might notice it a bit more. I didn’t ever feel like I was intimidated.'

Massey-Ellis was the subject of sexist jibes which cost presenters Andy Gray and Richard Keys their jobs at Sky Sports in 2011.

The pair left their roles with Sky after derogatory off-air comments about her ability to run the line, and the ability of women to officiate football matches in general, were picked up when they thought their microphones were off air.

The official admitted grassroots football can sometimes be a more intimidating place for female referees and recalled a time she was forced to stand up to a parent on the sidelines.

'One time one of the Dad’s on the sideline was giving me some grief and I just went over and said “If you think you can do a better job there’s the whistle” and he went “no, no, no I didn’t mean it like that."

'I said “well stop then” and just went off and carried on my game. I think probably that took a bit of strength. A lot of the time you just ignore it.'

Massey-Ellis has been professional for 10 years and in 2019 became the first woman to officiate in a men's European match - a 0-0 draw between PSV Eindhoven and LASK in the Europa League.