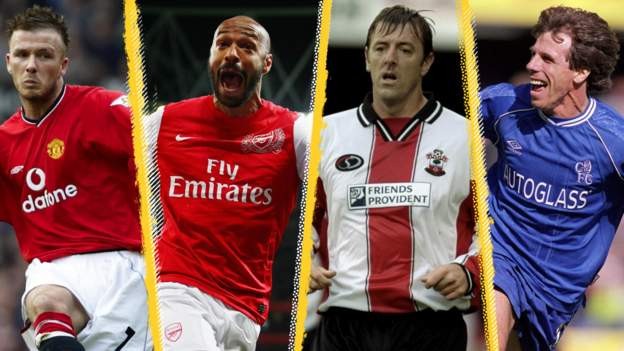 Alan Shearer smashed home a few, Gary Lineker never had a go and Micah Richards wasn't allowed to take one - it's time to look at Premier League free-kicks.

From bending it like David Beckham to crashing them home like Cristiano Ronaldo and the magical delivery of Matt le Tissier, this list has it all.

Shearer, as the Premier League's all-time top scorer, is unsurprisingly among the goals, while Lineker reveals the closest he ever came to taking credit for a free-kick.

To hear how they made their final selections, make sure you listen to the podcast on BBC Sounds and you can rank yours at the bottom of the page too.

Listen to Match of the Day Top 10: Premier League free-kicks

Rochemback's sensational free-kick against Manchester City in his final appearance for Middlesbrough in 2008 ensured the Brazilian will forever be remembered fondly on Teesside. His long-range effort made it 6-0 against City in a game that ended 8-1.

Richards: Terrible memories, so he is going at number 10. I was injured but travelled up to watch the game and was on the bench. Every time a goal went in I was getting lower and lower. It was a beautiful strike - a rocket. It was more hit and hope and there was a bit of bend on it and whatnot. Everything went right for him.

Shearer: The distance of it, though. Everything has to go for you when it is a worldie of a free-kick. There were still four in the wall!

Shearer's 100th goal for Newcastle United was all about power. While the Magpies were beaten 5-3 on the day, Shearer launched an unstoppable effort into the top right corner and beyond World Cup-winning France goalkeeper Fabien Barthez after the free-kick was rolled into his path.

Shearer: I'd have put it higher in this list, but you have both embarrassed me out of it. I wanted to score my 100th Premier League goal for Newcastle at Old Trafford, but we were beaten in the game so it was bittersweet really. That was pick the corner and hit it as hard as you can, and I did. It was one of those where I knew straight away that Barthez wasn't getting there. If that had been the winner I'd still be running around Old Trafford now.

Lineker: It's a major shock to us that you've not put yourself higher.

Chelsea's magician Zola bewitched Tottenham with his wand of a right foot in 2003. The free-kick from the left edge of the area begged to be chucked into 'the mixer', but the Italian had other audacious plans and found the top right-hand corner instead.

Lineker: I interviewed him and he told me he used to watch Maradona and practice with Maradona when he was at Naples as a young lad. You've got half a chance [when you learn from him], haven't you? That free-kick in particular, he started a long way outside the goal. The whip was incredible on the left side.

Shearer: The first goal I scored for Newcastle was a free-kick against Wimbledon at St James' Park - a good one that was very similar to Zola's against Spurs. It was the left-hand side, about 23 or 24 yards out and I just curled it with a bit of power at the keeper's side when he thought I was going over the wall.

The fact that "bend it like Beckham" is common parlance and a byword for trying to curl in a beauty says it all. This is one of the many free-kicks Beckham bent home for Manchester United from about 25 yards out in his time.

Shearer: He is more reliable than almost everyone on the list apart from Le Tissier and Thierry Henry. But Beckham was probably the best at that dip, swerve and bend - and all of those things. That is what he was known for.

Henry has hands on his hips, shrugs his shoulders as he is told where to place the ball for this free-kick for Arsenal against Wigan. It's a long way out, but not too far for the Frenchman. He goes up and over the wall and sees the ball home off the inside of the post. He celebrates by nodding at the referee and asks "is that enough?".

Shearer: What I like best about this is the celebration. C'est la vie, easy. The referee kept pushing him further and further back and it was to say, 'I can do it from anywhere'.

Lineker: Henry is another brilliant free-kick taker, not just this example. This one doesn't look that spectacular but you could see exactly what he was doing. It was almost like 'how good am I?' A bit of nonchalance and confidence.

With four delicate steps up to the ball, Elano let rip with a free-kick that was rising all the way until it bulged the back of the net. This strike against Newcastle was the Brazilian's first goal for Manchester City and a heck of a way to open his account in the English game.

Richards: I was right behind it. When you blast it you are not really controlling it, but he meant to put it exactly where he did. He said to me 'I'm going to put it in the top corner'. As he struck it, I was wondering how is he going to strike it with that pace and dip and get it into the top corner? It went in and I was like 'wow'. If he didn't tell me he was going to do it, I'd have thought it was a fluke.

Lineker: It reminds me of the closest I ever got to being involved in a free-kick. It was Paul Gascoigne's in the FA Cup semi-final against Arsenal in 1991, beating David Seaman with one into the top corner. Gazza was always bending them in, but this was a long way out. I remember running up to him and saying 'don't do one of your bendy ones, just smack it'. He did bend it, but he also smacked it straight into the top corner so I claimed the assist.

With a step, a stutter and one mighty swing of the boot, Gerrard stunned Newcastle fans into silence at St James' Park in 2007. This is how an apparent mix-up in a set-piece routine finds itself on our top 10 list.

Richards: Watch the free-kick and he is not actually looking when the ball is being rolled to him, so he has to adjust himself. That is what makes it even better, no?

Shearer: That is why I have it 10, because it is a bit of a mix-up. And it was against Newcastle so...

Ronaldo has scored 795 goals and counting, and this free-kick from 30 yards out against Portsmouth in 2008 is right up there as one of his most iconic. It has it all. It starts with him assuming his signature statuesque stance, he exhales as he runs up and thunders the ball up and over the wall with an almost unworldly dip and wobble. It ends with a bewildered goalkeeper David James picking the ball out of the net.

Richards: He started that wobbly, dip technique. The way he strikes the ball, even the commentator asks if it has taken a deflection? No, it just moves.

Shearer: Those types of free-kick were being scored years before Ronaldo did that. On that particular one, this dip is amazing. You see the look on David James' face, he is staring at him thinking 'what the hell has he done there?'. It was a stunning strike

You have your long-range efforts, then you have Figueroa's quickly-taken free-kick from inside his own half. The Wigan full-back saw Stoke goalkeeper Thomas Sorensen off his line and acted rapidly, brilliantly sending the ball over the stranded Dane.

Lineker: To score a free-kick from that range, from your own half, is special.

Richards: It was a lovely left-footer wasn't it? For his brain to switch on, see the keeper and hit it, how many times would you try that? Think of the technique to get it up and down over the keeper from there and the quick thinking.

No conversation about Premier League free-kicks would be complete without focusing on dead-ball specialist Le Tissier. Right from the top drawer of the forward's compilation of worldies is his famous flick-up and volley against Wimbledon in 1994.

Shearer: He had to do more than just hit it, there is more technique involved. Someone has to get the pass right, then you've got to flick it up, which is a skill in itself, then you have to catch it as as sweet as possible. But not only catch it, get direction on it. For that reason, there is more skill to Le Tissier's free-kick than anyone else's on this list. Everything had to be done to perfection. It's so difficult to do. We have not seen very many like that. It's unique, that is why I've put it at number one.

Lineker: That one is special. I'll agree with Alan. It's so clever, so brilliantly worked out. And you have to have the guts to do that, because you could look like an absolute mug if you don't get the flick right.

Richards: You have sold it to me...

Pick the order you would rank these Premier League free-kicks in.