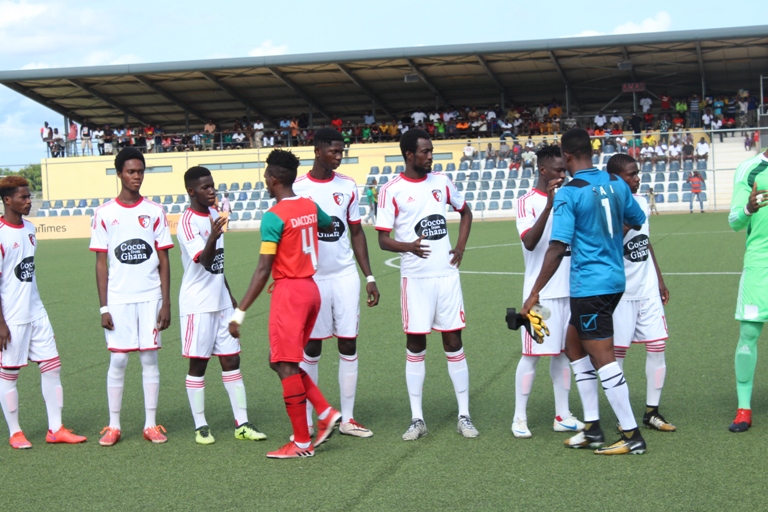 WAFA were held by Karela United FC at home.

Substitute William Opoku Mensah struck at the death to earn a precious 1-1 draw at WAFA on Wednesday in the Zylofon Cash Premier League.

Mensah headed a corner kick in the third minute of stoppage time and that happened to be the final touch of the match.

WAFA have themselves to blame after failing to kill off the game just seconds before that when Justice Amate's (named man of the match) shot from six yards was re-directed by a deflection.

In the 11th minute Amate surged forward after being played on by Charles Boateng but with his weaker right foot, he unleashed a shot and that drew a superb save from goalkeeper Michael Sai.

After 22 minutes, Karela were settled and causing pockets of troubles with their passing play.

Donald Koboh-Koboh Wellignton was found inside the WAFA box but he looked jaded, turned and shot but it came off the foot of Nuhu Musah.

Before the half-hour mark, Jean Vital was unmarked close to the box and fired a shot but Richmond Ayi dived to parry it out.

In two minutes, goalkeeper Michael Sai made two quality saves to deny the home team from taking the lead.

Umar Basiru aimed at goal with piercing shot but he was there to flap it away and when Boateng curled a free kick from the edge of the box, he tipped it over for a corner kick.

In the 40th minute, Basiru connected home a lobbed ball from inside the box into the net but the flag was up for offside.

WAFA continued to dictate the game but could not find the password to unlock the defensive play of the visitors.

In the 55th minute, Nuhu Musah applied a poweful header to a corner kick which slammed the side post and entered the net for the opener.

It was against the run of play.

Few chances were chances were created afterwards and when WAFA failed to finish off a nice move inside the box, they got punished.

New signing Timothee Koudo, on for his league debut, picked up a mis-kicked sliding clearance by goalkeeper Sai.

But his effort came off the side post and it fell to Amate who delayed in pulling the trigger from six yards.

At the other side, Karela earned a corner and it delivered which found William Opoku Mensah before headed in.

It was WAFA last home match to end the first half of the season but next will be a long trip to Bechem United on Sunday.