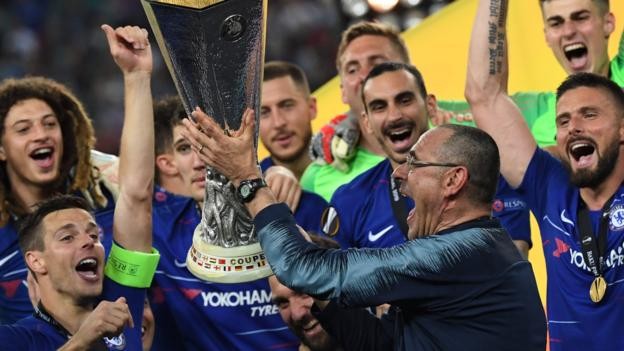 Maurizio Sarri's imminent departure from Chelsea comes as no surprise despite winning the Europa League - yet the maverick, unloved Italian can leave with his reputation enhanced.

Sarri shaped Chelsea's superb 4-1 win over Arsenal in Baku, returned them to the Champions League after finishing third in the Premier League behind two magnificent teams in Manchester City and Liverpool, and only lost the Carabao Cup final to Pep Guardiola's City on penalties.

And yet the 60-year-old Italian, still regarded as one of the coaching elite in his homeland, never looked like he would be in position to build on a season that would have most clubs talking instant contract extensions rather than divorce.

Sarri, significantly, showed as much appetite to stay at Chelsea as they did to retain him. He could now say, with some justification, he was underappreciated.

Indeed, the former banker can look back on his single season in west London with pride after that outstanding second-half display in Azerbaijan overpowered Arsenal to win his first serious silverware.

And it was not just in the European context that Sarri, who succeeded compatriot Antonio Conte in July 2018, deserves great credit.

It would have taken some manager to guide a team anywhere near Manchester City and Liverpool this season - as it will next season.

Sarri's departure will have some questioning why the two parties did not make more strenuous efforts to extend their relationship - and yet the counter argument is that this is the inevitable end to what often appeared a loveless sporting marriage.

Strange as it may seem, a very large majority of Chelsea fans will not mourn his exit.

Sarri leaves Chelsea with a healthy win percentage of 63.49%

Sarri was, in many ways, the anti-Conte. His predecessor left Chelsea amid rancour, his high-maintenance, full-on approach bringing a Premier League title and an FA Cup in two campaigns at Stamford Bridge as his relationship with the club's top brass fractured beyond repair.

Conte was sharp-suited and slick. Sarri was the superstitious chain-smoker, who wore a tracksuit at all times and sated his craving for nicotine by chewing on a cigarette butt during matches.

He left Napoli without a trophy but with an attractive and high-quality team, arriving at Chelsea with high praise from stellar figures such as Guardiola. The appointment was regarded as coup.

And yet, after a start of rich promise, trouble descended. Supporters did not take to 'Sarri-ball'; the mockery and abuse directed towards the manager became impossible to ignore, particularly during their FA Cup fifth-round home defeat by Manchester United in February.

That came less than three weeks after a 4-0 Premier League loss at Bournemouth, and a mere eight days after a 6-0 humiliation at Manchester City.

Six days after the Blues went out of the FA Cup, there was more embarrassment; keeper Kepa Arrizabalaga, apparently injured as a penalty shootout loomed, produced an astounding act of insubordination by refusing to be substituted during the EFL Cup final at Wembley. It seemed impossible that Sarri would survive.

The lack of immediate alternatives, and a very good performance in defeat by Manchester City at Wembley, gave the manager breathing space to deliver a season that he will regard as well within his remit at Chelsea.

This is a club where trophy targets are not necessarily set - but where the manager is expected to be in contention for major silverware and the Champions League places at the season's end.

So why is this decision to leave and return to Italy with Juventus no great surprise?

Sarri guided Chelsea to a finish above Tottenham and won the Europa League so impressively, making Arsenal look distinctly second rate in the process.

Yet his lack of connection with the players, as well as his tactical vagaries, meant his brief stay seemed so joyless for all parties.

Conte was a player of the highest class with a track record of success with Juve and Inter, so his word was law. Sarri's background was in banking with no playing record or history of major trophies to fall back on.

This may have contributed to a season in which his authority never appeared to be fully stamped on Chelsea's squad.

Sarri was also stubborn to the point of pig-headedness in some moments, especially with his removal of N'Golo Kante, widely accepted as the best holding midfielder in world football, to a role marginalised on the right to accommodate favoured son Jorginho, who followed him from Napoli in a £50m deal.

During the lows of February, Sarri's like-for-like substitutions - his habit of replacing Mateo Kovacic with Ross Barkley (or vice-versa) - became the subject of derision among Chelsea fans.

When Barkley came on for Kovacic during that FA Cup defeat by Manchester United, the moved was greeted with very audible ironic laughter from the stands, before Stamford Bridge echoed to chants of "you don't know what you're doing".

In his defence, Jorginho did improve as the season progressed but was rarely an upgrade on Kante, while Sarri's reluctance to use young England players Ruben Loftus-Cheek and Callum Hudson-Odoi retreated as the season went on. He proved, belatedly, he could be flexible if not exactly revolutionary.

Sarri never forged any sort of bond with Chelsea's fans, who regarded his signature style as tedious despite the flowing destruction of Unai Emery's Arsenal. His personality was a contrast to the combustible Conte and his wild celebrations.

Perhaps because he was steeped in finance rather than the football to which he arrived late, Sarri seemed spectacularly unconcerned with how he was viewed either inside or outside Chelsea.

He was even prepared to risk owner Roman Abramovich's wrath by complaining about the scheduling of an end-of-season charity game in Boston against New England Revolution.

He was actually vindicated to an extent after Loftus-Cheek sustained a serious Achilles tendon injury in the match.

Sarri is a singular man prepared to plough his own furrow, even if it is a lonely one.

And yet, because the season ended with real success, there will always be a question of "what might have been" had Sarri stayed - although this will be a question that may not trouble Chelsea or their fans for too long.

Sarri is leaving with his stock higher than when he arrived at Stamford Bridge.