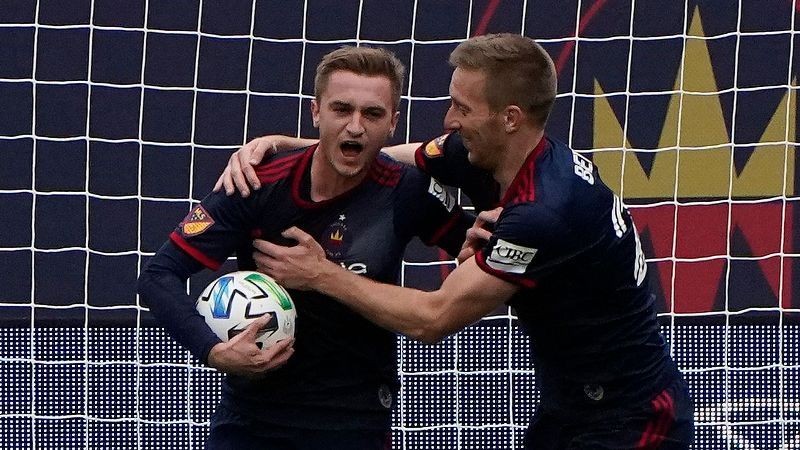 Djordje Mihailovic took advantage of a mishap by Sporting Kansas City keeper Tim Melia in the final seconds to score the tying goal, helping the host Chicago Fire salvage a point with a 2-2 draw on Saturday afternoon.

In the 95th minute, Melia came too far out of his net and tried to make a sliding catch of a free ball. Mihailovic beat him to the ball, however, and converted into an empty net for a stunning equalizer.

Gadi Kinda scored the go-ahead goal on a header off a set piece in the 83rd minute for Sporting Kansas City, who had a chance to move into sole possession of first place in the Western Conference. However, Melia's mental lapse and associated defensive breakdown in front of him left the visitors with only a point.

Chicago, which is fighting for a playoff spot in the East, earned a much-needed point despite seeing its three-game home winning streak come to an end.

While the Fire looked strong early on and delivered a handful of quality chances, it was Kansas City that opened the scoring. It proved to be a simple case of Erik Hurtado outrunning Chicago's back line for the ball and pushing it past Fire keeper Bobby Shuttleworth for his fourth goal of the season.

Chicago, though, leveled the match right before the half as Robert Beric was credited with his eighth goal of the year following a video review. His shot, which blazed past Melia and seemingly stopped at the line by defender Amadou Dia, was initially called a no goal. However, the video showed it did in fact clear the goal line.

The Fire also snapped a four-game losing streak to Sporting Kansas City, who have earned only this point from two matches since winning three in a row.