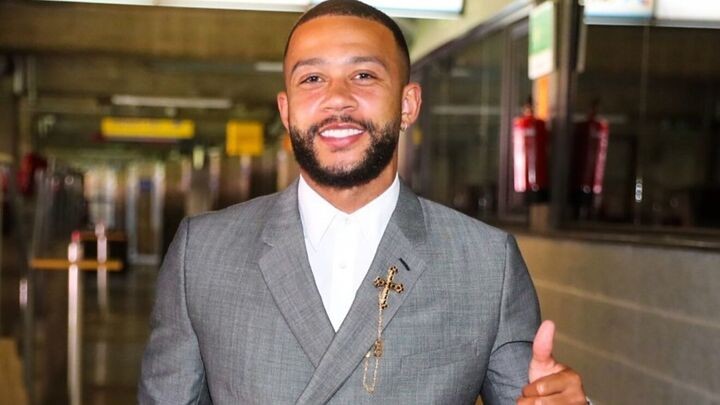 Memphis Depay spoke of his delight after he was officially unveiled as a Barcelona player at the Camp Nou on Tuesday evening.

The Dutchman has put pen to paper on a contract until 2023, and declared his excitement ahead of starting his career in a Blaugrana shirt.

"It's an honour to be here," Memphis said in a press conference at his unveiling.

"It's a dream come true since I was a little boy.

"It's been a long negotiation but the will has always been to play here.

"Thanks to the president and the entire board for making it possible."

He also credited Ronald Koeman for the role that he has played in his development in recent years, although he added that his move did not depend on the coach being in the dugout.

"I also want to thank the coach."

"[Koeman] played me as a centre forward," he said.

"He made me feel very comfortable and I must thank him for all that.

"I would have come even if he wasn't here because you can't say no to Barcelona. I would have still come, but it's also certain that he has had a big impact.

He went on to lavish praise on Lionel Messi and declared how much he was looking forward to playing alongside him.

"He is a legend and I don't need to say too much else. The best player in the world.

"Did you see what he did in the Copa America?

"I am really looking forward to playing with Leo [Messi] and his qualities are clear.

The press conference featured a particularly heartwarming moment, as president Joan Laporta revealed an anecdote from Memphis' mother about how her son had aspired to play for Barcelona from a very young age.

"[Memphis'] mother told me that when he was five years old, his grandfather gave him a Barcelona shirt as a gift," Laporta said.

"It was a prophecy."

The Dutchman replied that his grandfather would feel very proud of his achievement.

"I'm sure he would have been a very proud man today," Memphis said.