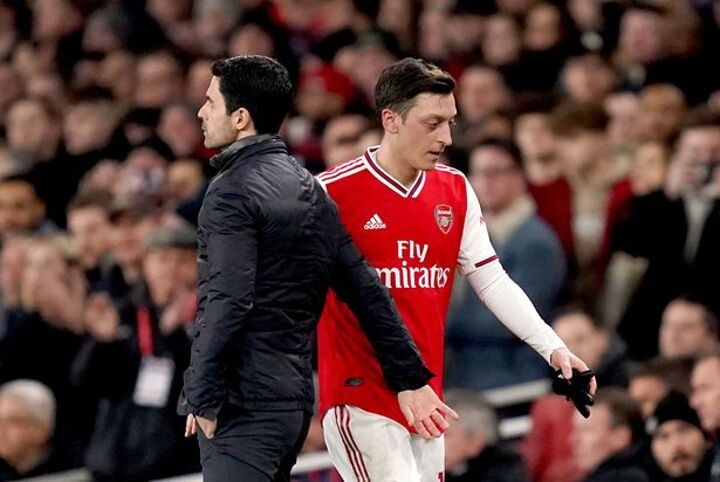 Mikel Arteta says he is allowing Mesut Ozil to leave Arsenal because he wants to "take the team in a different direction".

The 32-year-old midfielder is on the verge of completing a free transfer to Fenerbahce after Arsenal agreed to mutually terminate his contract with six months still left to run.

Ozil was a key figure for Arteta following his initial appointment as Gunners boss, but has been frozen out of first-team affairs since March.

Arteta's decision to omit Ozil from his registered 25-man squad effectively called time on the playmaker's time at Arsenal.

And he insists his call was based on purely football reasons rather than any reported rift behind the scenes.

Asked why he was willing to let Ozil go, Arteta said at a press conference: "For many different reasons, there is a history here as well what happened in the last few years how things developed, how I believed the team should evolve for the future and his position at the club.

"A player with such an importance that is not playing, not in the squad, is a really difficult situation to sustain for both parties.

"If a player wants to play and we cannot give him the minutes, obviously that situation has to be resolved."

Ozil has not played for Arsenal since March, and has seen his place in the side taken by rising youngster Emile Smith Rowe.

Fenerbahce had been keen on signing Ozil for some time, and are now due to land their man ahead of schedule.

Arteta added: "He’s a great footballer and a really talented footballer and a player who has done a lot for the football club but at the moment I want to take the team in a different direction and he would have more options [elsewhere].

"Maybe he was part of some plans at the start and he wasn’t anymore at the end."

Asked whether Ozil was close to completing his switch to Fenerbahce, Arteta replied: "Yeah but the quarantine situation is making that final step the longest ever because they have a lot of restrictions there, things that have to be done before announcing anything.

"Everything seems to be going ok but I cannot say what will happen, as soon as we can we will."