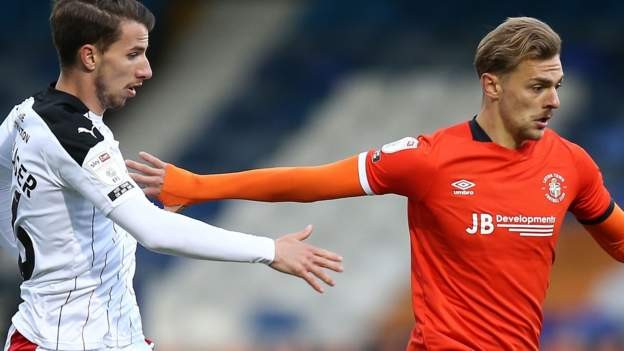 Elijah Adebayo hit the crossbar for Luton in the first half

Rotherham United's Championship survival hopes are out of their hands going into the final match of the season after they could only draw their game in hand at mid-table Luton Town.

The Millers started the day three points behind fourth-bottom Derby but knew victory in their last two matches would probably see them avoid relegation because of their superior goal difference.

In a frantic first half Elijah Adebayo thumped against the woodwork and Kiernan Dewsbury-Hall's corner came off the post for Luton, while Rotherham also hit the post through Matt Crooks' deft lob.

The visitors came closest to a winner after the break when Crooks headed Ryan Giles' fine cross agonisingly wide at the back post.

Paul Warne's Rotherham - who have played 11 Championship games in 33 days and won just one of them - will need to win at Cardiff on Saturday and hope Derby fail to beat relegation rivals Sheffield Wednesday if they are to stay up.

Wayne Rooney's Rams will be safe with victory over second-bottom Wednesday, who must win at Pride Park and hope Rotherham do not triumph against Cardiff if they are to avoid going down to League One.

The point for Luton guarantees them a top-half finish and extends their unbeaten run to six matches as they continue their impressive finish to the season.

Adebayo almost beat visiting keeper Jamal Blackman from a difficult angle but his effort crashed off the bar and Dewsbury-Hall's corner would have gone straight in if it wasn't for Blackman clawing the ball against the post and out.

Rotherham also carried threat, Michael Smith putting a free header wide while Crooks watched his dink over Simon Sluga bounce and come back off the post.

The second half was a lower key affair but Crooks may rue his missed header while Luton's Sonny Bradley had a stoppage time goal from a corner disallowed for a foul.

Jamal Blackman (Rotherham United) wins a free kick in the defensive half.

Richard Wood (Rotherham United) wins a free kick in the defensive half.

Attempt missed. Elijah Adebayo (Luton Town) right footed shot from the right side of the box is close, but misses the top right corner. Assisted by James Bree following a fast break.

Attempt blocked. Michael Ihiekwe (Rotherham United) header from the centre of the box is blocked. Assisted by Lewis Wing with a cross.

Attempt saved. Lewis Wing (Rotherham United) right footed shot from outside the box is saved in the bottom right corner.

Freddie Ladapo (Rotherham United) wins a free kick in the attacking half.

Chiedozie Ogbene (Rotherham United) wins a free kick in the defensive half.

Ben Wiles (Rotherham United) wins a free kick in the defensive half.

Attempt missed. Kal Naismith (Luton Town) right footed shot from outside the box is too high. Assisted by Kiernan Dewsbury-Hall.