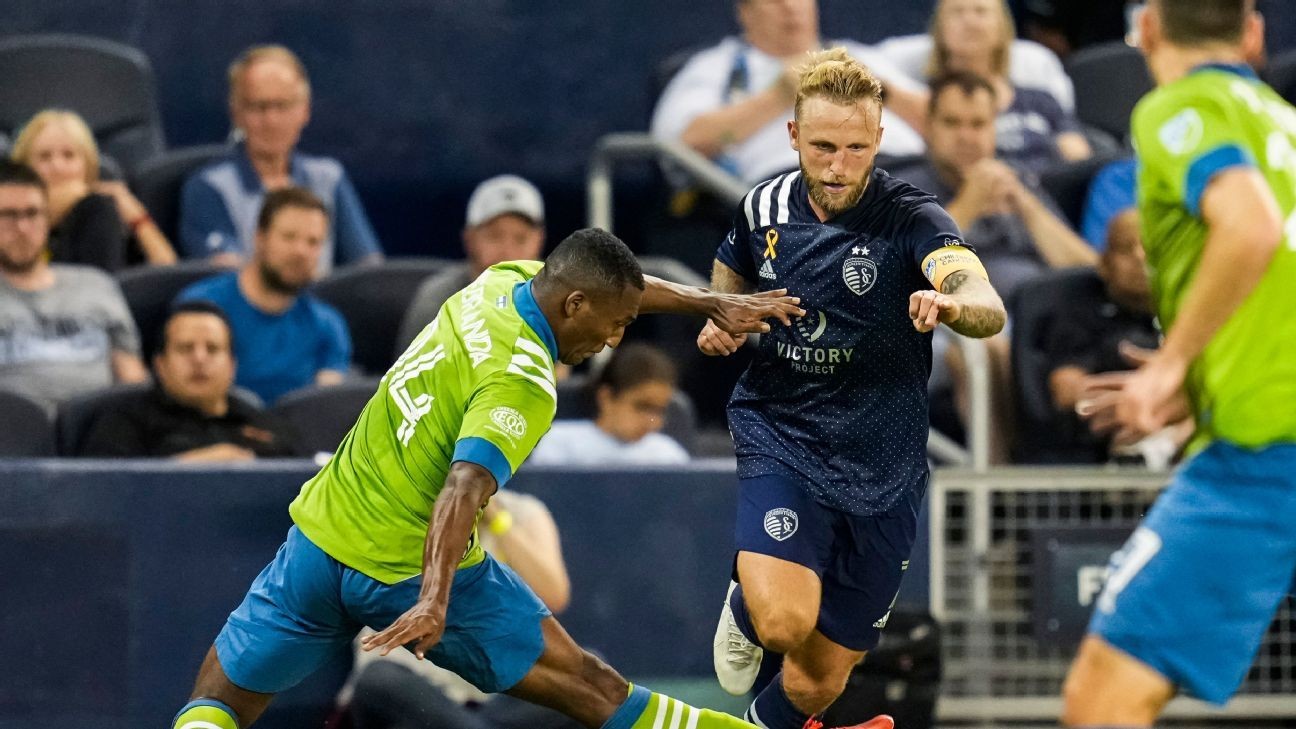 There is less than a month remaining in the 2021 Major League Soccer season. Two teams are locking up their places in the postseason (New England and Seattle), and six teams know they'll be watching from home.

A great deal can (and will) change between now and Decision Day on Nov. 7, but we're not letting that stop us from taking a way-too-early look at potential postseason matchups. Just the above two teams have locked in a place in the playoffs, while six have been eliminated from contention, so we can't emphasize enough: These are hypothetical matchups, potential postseason contests based on the conference standings after Week 30.

Every week we'll bring you updates on who has qualified, who has been eliminated and the matchups that could play out come Round 1. So, without further ado, let's dive into the games that have us counting the days until the MLS Cup playoffs begin on Nov. 20.

Who can clinch this weekend

Nashville SC: It's fairly straightforward for NSC. Nashville is in if it wins against Philadelphia and any one of the following happens: Montreal loses to Toronto; the Red Bulls fails to beat Columbus; NYCFC either loses or ties against D.C. United.

Sporting Kansas City: SKC clinches a spot if it beats Seattle. Otherwise the complexity rachets up to the point that it's time to bring in the guys from The Chase. If SKC ties, it would also need one of the following to occur: Vancouver loses or ties San Jose; Minnesota loses to LAFC; the LA Galaxy and FC Dallas tie; Portland loses to Colorado and RSL loses to Chicago. Even if SKC lose it could still clinch if one of the following happens; the Galaxy lose to Dallas; Minnesota and LAFC tie; Vancouver and LAFC both lose.

Who can be eliminated this weekend?

San Jose Earthquakes: Time is running out for San Jose, despite the midweek 4-0 thumping of Austin. If the Quakes lose to Vancouver, and either Minnesota or RSL win, there will be no way back for Team Chaos. And what then for manager Matias Almeyda? Will he see out the final year of his contract, or will he finally jump ship after having no shortage of suitors the last two seasons.

New England Revolution: Even with the top seed in the Eastern Conference secure, the Revs haven't taken their collective foot off the gas, with manager Bruce Arena fielding a line that was pretty close to his first choice against D.C. United. Not only did the Revs prevail 3-2, but all three Designated Players -- Carles Gil, Gustavo Bou and Adam Buksa -- got on the scoresheet. Just four points from their last three games will see New England break LAFC's single-season points record of 72. The Revs can clinch the Supporters Shield this weekend by either beating Orlando or Seattle losing or tying Kansas City.

Seattle Sounders: Seattle was forced to settle for a 1-1 draw on Wednesday against Colorado, but still managed to increase its lead atop the West to six points. Saturday's 4-1 win over Vancouver confirmed the Sounders' spot in the playoffs. Sporting Kansas City is still within shouting distance -- and the two teams play this weekend -- but the top seed is Seattle's to lose.

FC Cincinnati: Sure, Cincinnati's elimination from the playoff race was confirmed last weekend, but the hits just keep on coming. Wednesday's encounter with the Chicago Fire looked destined to end in a 3-3 draw when Tyler Blackett equalized in stoppage time. But c'mon. It's FCC, and on cue it coughed a stoppage time goal of its own to lose 4-3. New GM Chris Albright knows the enormity of the rebuild that lies ahead.

Austin FC: Expectations are typically low for expansion teams, even as sides like Atlanta, Nashville and LAFC performed well in their debut seasons. So it proved for Austin, which is currently tied for the second-worst attack in the league alongside FC Cincinnati, with just 29 goals scored. While performances improved after the mid-season arrival of Sebastian Driussi, Austin still needs a few more attacking pieces to contend for a playoff spot.

Toronto FC: The Reds' fall from grace was stunning, given that this was a team that finished runners-up in the Supporters Shield race last year. Having to start the season playing "home" games in Orlando due to COVID-19 protocols didn't help. Neither did injuries to the likes of reigning MVP Alejandro Pozuelo and Jozy Altidore. But overall this was a team that got old in a hurry, making it ill-equipped to play the kind of pressing style that Chris Armas wanted, and it cost him his job. Now it will be up to GM Ali Curtis and whoever is hired to be the next manager to rebuild this roster.

Houston Dynamo FC: Not much was expected from Houston in 2021, and the Dynamo did little over the course of the season to dispel that notion, especially during a 16-game winless streak that spanned all of June, July and August. The fact that results began to improve once Darwin Quintero was back in the lineup is testament to the fact that there simply aren't enough difference-makers on this team. With new owner Ted Segal now on board, the hope is that the purse strings will be loosened and give manager Tab Ramos some help, assuming he survives of course.

Chicago Fire FC: The Fire is a team perpetually out of balance. Sharp attacking play is undone by mistakes in the back. A stout defensive performance coincides with a drought in front of goal. Such is the way of things when DPs don't perform up to expectations. Now the Fire is looking for a new manager again after the dismissal of Raphael Wicky, though sporting director Georg Heitz is the man who should be looking over his shoulder.

FC Dallas: The emergence of scoring sensation Ricardo Pepi wasn't enough to lead Dallas into the postseason. Instead, FCD could finish last in the Western Conference as high-priced veterans like Franco Jara continue to underwhelm. Pepi seems destined to follow other Dallas products to Europe, marking another year where the homegrown talent pipeline couldn't translate to on-field success. Luchi Gonzalez, one of the architects of the team's heralded academy, didn't gain much traction as manager and was fired in September.

2. Nashville SC vs. 7. D.C. United: Draws were the order of the day on Wednesday, resulting in a bit of shuffling in the standings, but no team getting any separation. A matchup involving these two teams would make for an interesting chess match given Nashville's defense prowess and DCU's pressing ways. Hany Mukhtar showed his value by delivering a second half equalizer against Columbus, but with 16 draws is it enough for Nashville to make a deep run? Julian Gressel, whose 11 assists are tied for fourth in the league, remains a vital cog in the Black-and-Red's attack.

3. Philadelphia Union vs. 6. CF Montreal: Philadelphia's consistency following a campaign in which it transferred Brenden Aaronson and Mark McKenzie has been impressive, with Kacper Przybylko building on last year's solid season to net 10 times so far in 2021. Montreal has punched above its weight for much of the campaign, but the offseason trade that brought in midfielder Djordje Mihailovic has paid off in a big way, with the former Chicago attacker tallying four goals and 15 assists.

4. Orlando City SC vs. 5. Atlanta United FC: Just about every neutral in the league is hoping for this matchup given the enmity that has taken root in just a few short years. Atlanta was left for dead at one point this season, but enjoyed a revival following the firing of Gabriel Heinze, as well as the arrival of midfielder Luiz Araujo. Orlando has endured some ups and downs as well, but possess a few match-winners in Nani and Mauricio Pereyra.

2. Sporting Kansas City vs. 7. Vancouver Whitecaps: The Caps have been flying under the radar for much of the season, especially after cutting manager Marc Dos Santos loose back in August. But Vancouver had been stringing together results even before Dos Santos' ouster, and interim manager Vanni Sartini, with the help of new midfielder Ryan Gauld, has kept the momentum going. SKC has been one of the league's more consistent teams this season, with Daniel Salloi putting together an MVP-worthy campaign of 16 goals and eight assists.

3. Colorado Rapids vs. 6. Minnesota United: It was just 12 days ago that Colorado delivered an impressive 3-1 comeback victory over the Loons on the road. How much that might play into Minnesota's psyche is open to debate. The postseason is its own animal. But a road tilt in the thin air of Commerce City -- not to mention the Rapids' prowess on set pieces -- would be a special challenge. The Loons maestro Emanuel Reynoso would need to be at his best.

4. Portland Timbers vs. 5. LA Galaxy: Both of these teams have been kind of all over the place this season in terms of their form, making this 4 vs. 5 matchup typically difficult to predict. A run of 22 points from a possible 24 vaulted the Timbers up the standings, only for two straight losses -- including one to the Galaxy -- to bring them down a peg. A nine-game winless run sent the Galaxy in the opposite direction, only for them to win their lasts two. Portland's balanced scoring makes them a formidable foe, but would it be enough to topple Javier "Chicharito" Hernandez, Jonathan dos Santos and Co.? Neither team is formidable defensively, making a goal fest likely.