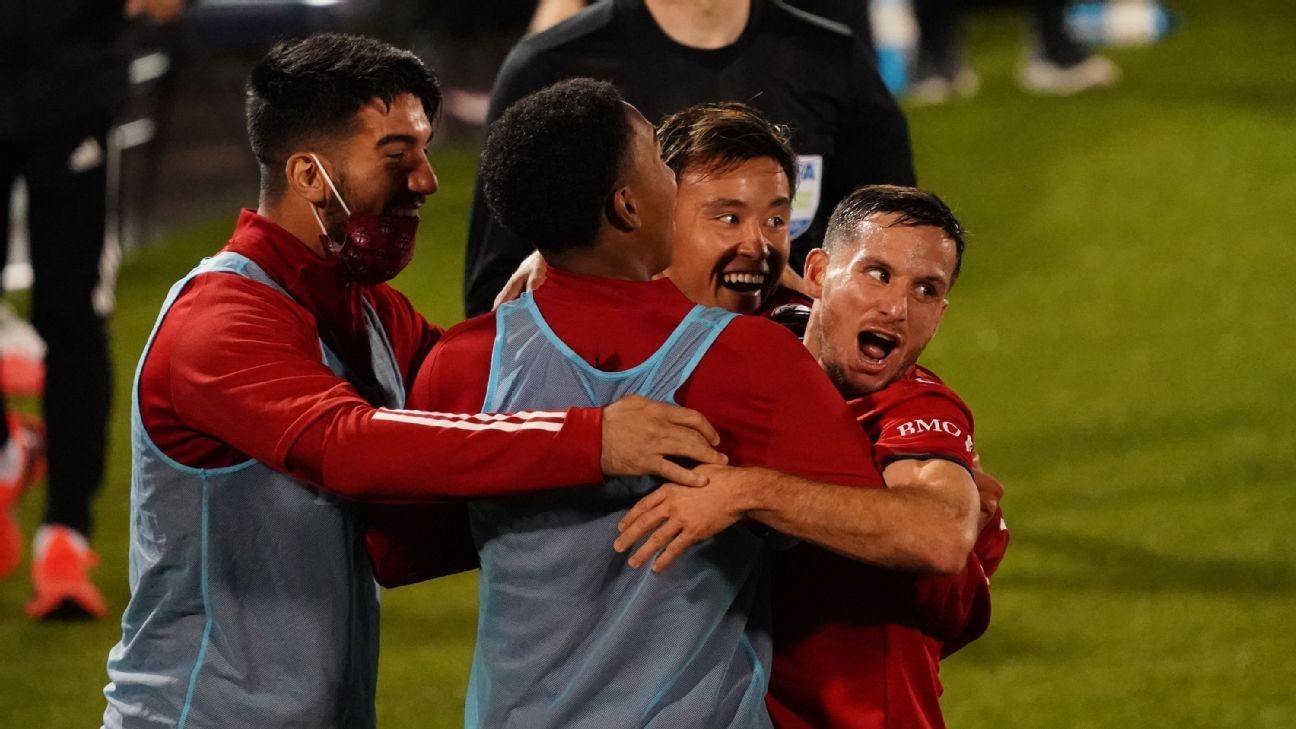 Toronto FC remained on top of the heap, and the playoff picture in the Eastern Conference came into focus as the top four sides clinched postseason berths. Yet it's still wide open in the Western Conference, with no playoff participants yet to punch their tickets and three teams -- Seattle Sounders, Portland Timbers and Sporting Kansas City -- divided by just one point at the top. There were shocks, late, late goals and plenty of drama. In short, just another weekend in Major League Soccer.

Jeff Carlisle recaps the weekend with a brand-new edition of MLS Power Rankings for all 26 clubs.

News emerged over the weekend that the Supporters Shield won't be awarded this season, and Toronto coach Greg Vanney was less than pleased about the decision. One would hope, though, that everything TFC has been through will somehow be remembered and recognized if it secures the top spot in the standings. Pablo Piatti's late header against Atlanta, securing a 1-0 win, put the Reds one step closer towards that goal.

Toronto left it super late to defeat Atlanta United this weekend, though their efforts in 2020 won't be rewarded with the Supporters Shield, which left a nasty taste in the mouth of TFC players and coaches. David Butler II-USA TODAY Sports2. Philadelphia Union

With Brenden Aaronson's January transfer to FC Red Bull Salzburg confirmed on Friday, eyes have now focused on defender Mark McKenzie. He did his prospects no harm with a late blast to secure a midweek road draw at D.C. United.

The not-so-good: Wins have recently been hard to come by, with OCSC recording three draws in a row including Sunday's 1-1 effort at New York Red Bulls. The attack has gone a bit stale as well, with just five goals in five games. The good: The Lions extended their unbeaten streak to 12 games, but best of all? The Lions are in the playoffs for the first time in their history.

A loss to RSL and failing to beat a shorthanded LAFC side at home took the shine off a what had been a five-game winning streak. The Timbers also lost influential forward Jeremy Ebobisse to a leg injury as well.

A 0-0 tie on the road at San Jose isn't the worst result, though it counts as a missed opportunity to take sole possession of first place in the West. Having Raul Ruidiaz contract COVID-19 while on international duty is yet another obstacle to overcome.

It wasn't that long ago that Kekuta Manneh was a forgotten man. But against Montreal, the former Whitecap looked reborn and was a constant menace down the left wing. The Revs aren't mentioned among the top teams in the East, but they are firmly ensconced within the playoff places, and boast the potential to do some damage once the postseason starts.

The Crew needed something special to snap a four-game winless streak. Columbus got it with Artur's first regular season goal in a 3-1 defeat over NYCFC. The injuries continue to pile up though, with Artur and another goalscorer, Pedro Santos, the latest victims.

Gyasi Zardes and the Columbus Crew get back to winning ways with a 3-1 victory vs. NYCFC. Watch MLS on ESPN+.

NYCFC's rise up the standings has been halted, with Ronny Deila's side now winless in three. The attack is no doubt still feeling the effects of Heber's injury and Alexandru Mitrita's departure via loan. Can Deila find a solution?

Peter Vermes made his irritation plain with referee David Gantar in his postgame comments, including a penalty shout that went unheeded. But the bottom line is SKC should have been more organized than to be caught out by a long ball on Chicago's late equalizer in the 2-2 draw. As a result, a chance to go top in the West was squandered.

Djordje Mihailovic scores in the final minutes to earn a 2-2 for the Chicago Fire vs. Sporting KC. Watch MLS on ESPN+.

Given the attacking talent either missing through injury or the aftermath of international duty, it's still tough to know what kind of team LAFC is at this point. But after losing 2-0 to Vancouver last week, credit is due the Black-and-Gold for scratching out a 1-1 road draw at Portland on Sunday night, with 16-year-old Christian Torres scoring the equalizer.

The Reggie Cannon saga -- in which the former defender said the club asked him to apologize to fans for taking issue with getting booed when he took a knee in a game vs. Nashville SC -- overshadowed FCD's massive 1-0 win in midweek against Kansas City. The he said/they said situation was the latest bad look for Dallas.

Two goals up at home, the Loons were lucky to escape with a 2-2 draw against Houston as Minnesota appeared to be playing not to lose rather than closing it out. Was it rust from two consecutive postponements? Possibly, but the Loons still needed to do better.

Alumni of the Red Bulls' USL team have long been a boon to the first team and the past week was no different, as 17-year-old Caden Clark's equalizer secured a 1-1 draw against Toronto and Brian White did the same over the weekend in a last-gasp 1-1 tie at home to Orlando.

play2:06Red Bulls net late goal to a save point vs. Orlando

Brian White scores in stoppage time for New York Red Bulls in a 1-1 draw with Orlando. Watch MLS on ESPN+.

San Jose has done well to get back in the playoff race, and while Sunday's 0-0 home draw against Seattle wasn't perfect, it made for a four-point week. Upcoming games against Vancouver and Real Salt Lake are a golden opportunity to close the postseason deal.

Hany Mukhtar was brought in to be Nashville's attacking hub prior to the season. Against Houston he looked the part, with two goals in a 3-1 victory that kept it just inside the playoff places.

Next MLS match: TBD due to postponements

As the Rapids emerge from their COVID-19 outbreak, they'll have another week to prepare before they play again. Will their relative inactivity work for them or against them?

Credit the Fire for battling to the end and getting a 2-2 draw against Kansas City, but Chicago really needed to do better at home. At least Robert Beric continued his hot streak, bagging his sixth goal in his last eight games.

Bojan came alive in the Impact's 2-1 win over Inter Miami with a goal and an assist. The win enabled Thierry Henry's side to get a bit of daylight between themselves and the other teams chasing them for one of the last playoff spots.

The eighth and final playoff spot is still in the Caps' possession, due in no small part to the 2-0 win earlier in the week over LAFC. But man did the late 1-0 loss to the Galaxy sting. Next weekend's home tilt against San Jose will be critical to the Caps' postseason hopes.

Kai Koreniuk finds the back of the net to give LA Galaxy three points vs. Vancouver. Watch MLS on ESPN+.

Just when it looked like RSL was in freefall, it conjured up a 2-1 home win over previously high-flying Portland. Damir Kreilach continues to defy any positional label other than goalscorer. His eight goals have almost singlehandedly kept RSL afloat.

Goals are still a rare commodity for the Five Stripes, who tied Miami 1-1 away and suffered a late 1-0 loss at Toronto. Home matches against D.C. United and Cincinnati over the next two weeks will go a long way to determine if Atlanta can sneak into the postseason.

The Brek Shea comeback tour is in full swing, with the former U.S. international scoring his third and fourth goals of the season during the week. Unfortunately for Miami, the rest of the team couldn't make them count, tallying just one point in two games.

Two goals down at one point, the Dynamo did well to grab a point at Minnesota and it might have gotten the win were it not for the woodwork. The playoff dreams aren't dead yet, but Houston is running out of time to make them a reality.

There was joy in the nation's capital at last as the Black-and-Red beat Cincinnati 2-1 for its first victory since Sept. 2, and just its third of the season. The fact that cancer survivor Chris Odoi-Atsem got the game-winner added to the positive vibes. On top of a midweek 2-2 draw against Philadelphia, interim manager Chad Ashton will consider the week a big step forward for his side.

Whoever had "Kai Koreniuk stoppage-time winner" in their Save Schelotto bingo card should head to Vegas immediately. Schelotto's seat still seems unbearably hot - especially after getting spanked 4-0 by San Jose - but the 1-0 win over Vancouver should allow him to survive a while longer.

A 2-1 win in the Hell is Real Derby against Columbus put some spring in FCC's step. But the 2-1 home loss to DC -- due in part to a keeper gaffe from Bobby Edwards -- halted that momentum, as well as any faint playoff hopes.