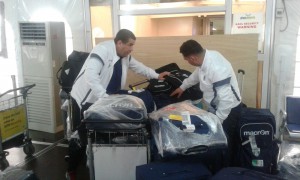 Ashanti Gold SC’s opponent in the 2015/16 CAF Champions League, O.M. Bejaia have touched down at the Kotoka International Airport in the early hours of Friday morning ahead of the clash on Sunday.

The Algerian side will then travel from Ghana’s capital, Accra with African World Airlines to Kumasi where they are expected to lodge at the Golden Tulip Hotel.

They are expected to undergo light train session at the Baba Yara Sports Stadium later on Friday after Jumah Prayers at the Kumasi Central Mosque.

They will then train at the Obuasi Len Clay Stadium on Saturday morning as per CAF regulations regarding international competitions, and drive back to their base at the Golden Tulip Hotel before the game on Sunday.

The Algerian are poised to pose a threat to the continental ambitions of the Miners.