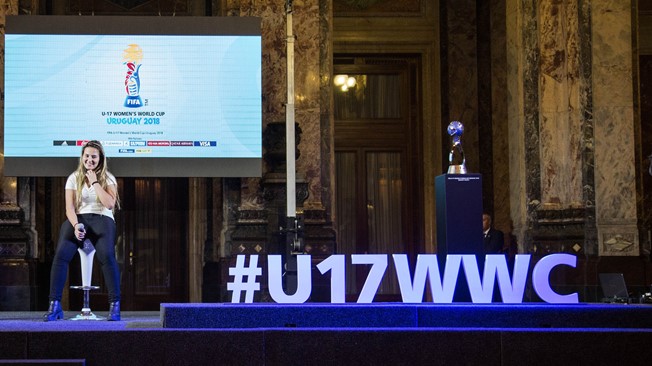 Deyna Morales was nine when she began playing for her hometown club San Jacinto. Though she was the only girl in the junior team, it did not hold her back. Such was her talent, determination and perseverance that the club was moved to set up its own women’s team, a springboard for the growth of the women’s game in the area.

The mould-breaking Morales is now 16 and is readying herself for the biggest challenge of her short footballing career: captaining the host nation at the FIFA U-17 Women’s World Cup Uruguay 2018.

“Football’s been a passion of mine ever since I can remember,” Morales told FIFA.com. “I felt a bit embarrassed to begin with, like every girl I think, but the boys encouraged me. Now I see a lot of girls playing. I feel as if I helped make that happen and it makes me proud.”

Born on 19 September 2001 Predominantly right footed, she still plays for San Jacinto She was 14 when she appeared at her first U-17 Women’s South American championships, in Venezuela in 2016 Scored two goals in the competition, both from the penalty spot

Despite her pioneering achievements at San Jacinto, Deyna does not feel she is unique: “I think every girl who plays the game has helped revolutionise Uruguayan women’s football.”

The central midfielder added: “It’s growing fast and the World Cup will bring more support. People will be talking about women’s football, which will generate interest and get people watching the games. The impact can only be positive.”

Asked about the effect the tournament can have in the region as a whole, Morales said: “The fact that it’s being held in such a big footballing country as Uruguay is a source of motivation in itself. It’s also the first U-17 Women’s World Cup be held in South America, which should also give all the programmes a boost.”

What are her attributes?

Her coach Ariel Longo: “She can deal with any situation, as she showed at the South American Championships in 2016. She’s good with both her feet, she can switch the play, she plays with her head up and she can be fiery at times. She’s got a lot of character, which is why she’s the captain.” Deyna on Deyna: “I’m a central midfielder, quite technical, and I can score goals. If I need to get forward to score, I give it everything I have. I’m a bit like Alvaro Recoba, here in Uruguay, or Toni Kroos (laughs). In women’s football I admire Marta, Alex Morgan and Carli Lloyd.”

Does the pressure of being World Cup hosts scare her?
“No. I’m sure the fans will want us to win, but they’ll support us no matter how the results go. Uruguayan people really get behind their national teams, and it’ll be the same with us.”

A wish?
“I’ve got two: winning the World Cup and making a living from football. That’s my only goal right now. I know it’s not easy to go and do that in Uruguay, which is why I’m considering the option of going abroad. Things will change here with the World Cup, though. We’ll just have to wait and see.”

As the host nation, Uruguay qualify automatically for the FIFA U-17 Women’s World Cup 2018. The Uruguayans will nevertheless take part in the South American qualifiers for the competition, to be held in Argentina on 7-24 March. The tournament will see two teams qualify for the world finals in the age group.  If La Celeste finish first or second, the team taking third place will go to the World Cup.