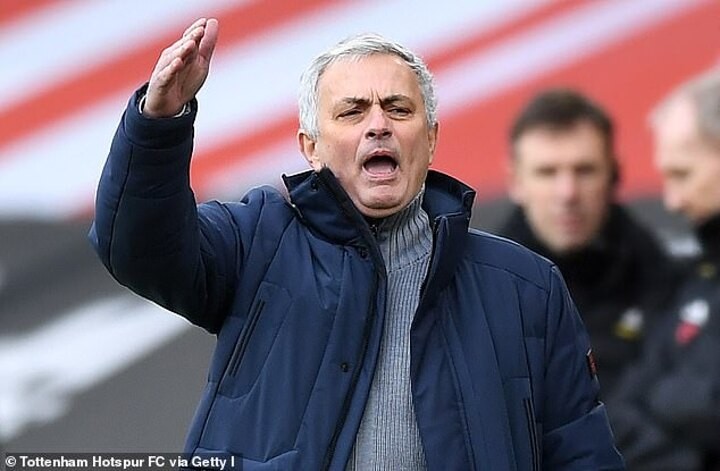 The Welshman has remained on the fringes of the Spurs squad since his return to the club and was an unused substitute in their 3-1 victory over Sheffield United on Sunday.

And whilst many have been perplexed by the winger's lack of game time at Tottenham, a recent video released by the club has unearthed some potential hostility between him and Mourinho.

The club's official channel, SpursTV,  broadcast a video that showed Mourinho complaining about Bale, exclaiming: 'You want to stay here? Or go to Real Madrid and play no football?'

And the Sun have reported that the Portuguese manager was talking to his No 2 Joao Sacramento and other backroom staff.

Mourinho was relaying to his coaching staff talks that he had with Bale, who is in the middle of a season-long loan from Real Madrid.

The Welsh international has made just one Premier League start since re-joining the club he made a name for himself at and it now appears he has already had crisis talks with the boss.

Bale has featured slightly more in the club's Europa League campaign, as he has amassed just 161 minutes of Premier League action this season.

It is believed that Mourinho was never much of a fan of Bale's well-documented return to North London and felt the club already had enough wide options.

After their victory over relegation-threatened Sheffield United, Mourinho had plenty of praise for goalscorer Tanguy Ndombele.

The French midfielder was outcast by the manager upon his arrival but has since earned his place in the starting team - and Mourinho's comments after the match appeared to be a cryptic message to Gareth Bale, who watched on from the bench.

'I have enough experience to say when a player is not playing very well, it is his responsibility,' Mourinho explained.

'When a player turns things around and brings his performances to a very high level it is also his responsibility. It is a great example that the door is open.

'When a player is not playing he has to understand why - and has to try to understand how he can walk through that door even after a difficult period.

'I give special credit to Tanguy for his will to train hard and his desire to win and earn a place in the team.'