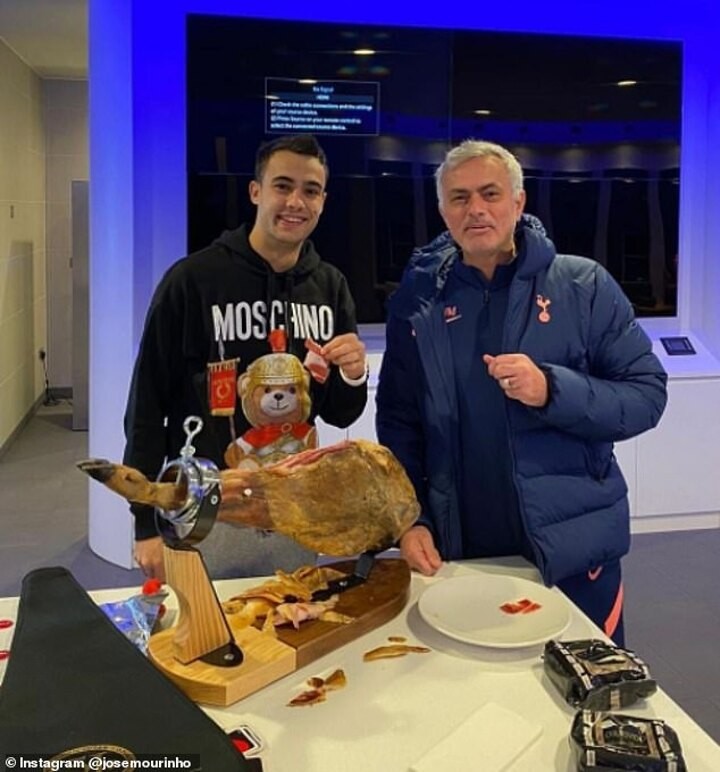 Jose Mourinho served up a feast for his Tottenham stars after they went top of the Premier League table by forking out £500 for a leg of ham.

Spurs put Manchester City to the sword on Saturday and underlined their title credentials after a 2-0 win, and Mourinho posted a picture of himself and Sergio Reguilon next to the giant joint of meat, suggesting the Iberico Ham was a reward for the left-back's performance.

'A promise is a promise,' he wrote alongside the photo on his Instagram account. 'It cost me £500 but I keep my promises,' he added as he tagged Reguilon's account.

Reports in Spain claimed it was a prize for the Spaniard after keeping City winger Riyad Mahrez at bay throughout the game, while Sport Witness believe it was because Reguilon had won a bet that Spurs would win the game.

With Raheem Sterling not fit enough to start the match, City's hopes fell on Algerian international Mahrez, but he failed to inspire Pep Guardiola's men and was hooked for the English winger with 20 minutes to play.

Spurs midfielder Erik Lamela posted a video of the ham joint to his own Instagram followers, showing Reguilon carving up the meat - which was hoisted up on a huge wooden platter.

The north Londoners finished a gameweek top after nine games for the first time since 1985 thanks to goals from Son Heung-Min and Giovani Lo Celso.

Mourinho has been an avid user of social media this season, delighting fans with some hilarious insights behind the scenes, but he hasn't always used it in a jovial manner.

After Spurs lost 1-0 to Royal Antwerp, he posted a picture of himself sitting on the coach and wrote: 'Bad performances deserve bad results. Hope everyone in this bus is as upset as I am. Tomorrow 11am training.'