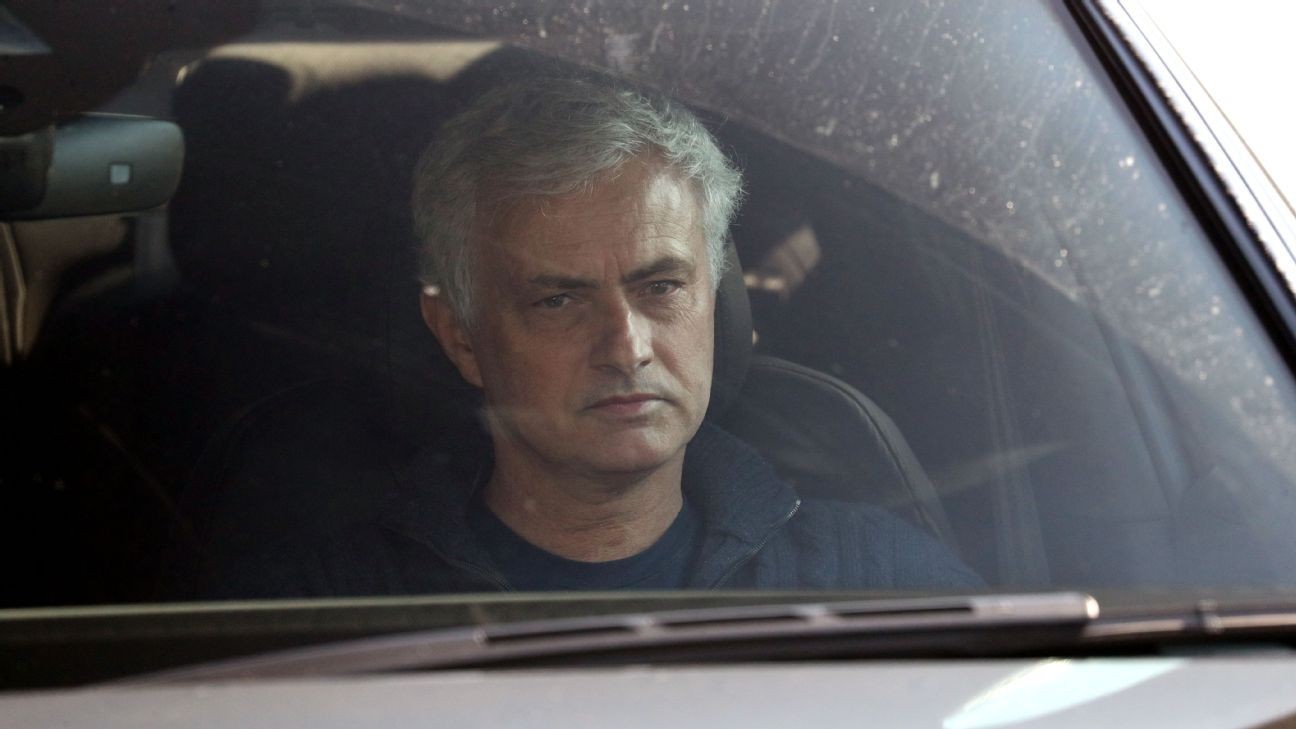 You always knew there was going to be a next chapter; you just didn't expect it was going to come two weeks and one day after being relieved of duty at Tottenham Hotspur. And, obviously, you wouldn't have expected Roma. Not this Roma.

The sheer speed of Jose Mourinho's appointment at Roma leaves you reeling, especially when you consider it took them three-and-a-half months -- from the moment the new owner, American entrepreneur Dan Friedkin, took over -- to fill the vacant position of general manager. After a long and painstaking search with the help of a data intelligence company, Retexo, they ended up with Tiago Pinto, who joined from Benfica.

Was this manager search quite as exhaustive? Or was it an impulse move, one guided by gut sentiment, love at first sight?

"As soon as Jose told us he was available, we immediately seized the opportunity to speak to one of the greatest coaches of all time," said Tiago Pinto. "We were impressed by his desire to win and his passions for the game of football. He doesn't care about the trophies he has won in the past, he only thinks about the next trophy he's going to win."

Who are soccer's 39 best players age 21 or under?Why Man United vs. Liverpool was postponed, what happens nextWhich MLS youngsters are ready for Europe?

There's a lot to unpack here. It would be churlish to point out that few managers in the game remind you of their achievements as often as Mourinho does: witness the famous "respect" incident, when he said "I won more Premierships alone than the other 19 managers together." But the fact that Mourinho would throw himself back into the fray so quickly speaks volumes as well.

Given the way things ended for him at his three previous clubs -- Tottenham, Manchester United and Chelsea the second time around -- when he didn't just part ways, but left under a cloud with the smell of burnt bridges in his wake, it was perhaps evident that he wouldn't get another shot in the Premier League, at least not at a club on the left-hand side of the table. But still, you imagined, there were other options. He is still one of the most successful managers in the history of the game, a guy with two Champions League trophies at home, a cosmopolitan figure who had delivered league titles in Portugal, Italy, Spain and England (eight in total), a man whose connections to the game at every level run wide and run deep.

You imagined him taking some time off, letting the post-Spurs negativity wash away from the echo chamber of the English media, and then perhaps working his magic to seduce another club into giving him a go. And make no mistake about it: after some rest and regeneration, Mourinho scrubs up real well.

He's comfortable talking to the sort of wealthy and powerful men who own clubs. He can be personable, charming, articulate and affectionate with the best of them. And, incidentally, that schtick doesn't just work with nostalgic Russian oligarchs like Chelsea's Roman Abramovich (the second time) or bottom-line owners like the Glazers at Manchester United. It also worked with a dyed-in-the-wool hardcore football executive like Daniel Levy, who took him to Tottenham after the United debacle. (Evidently it also worked with Friedkin and his son Ryan: Texans with a background in car dealerships, hotels and entertainment.)

Or, he could have maybe had a go at the 2022 World Cup with a talented Portugal squad, if incumbent Fernando Santos, who is 66, leaves the gig after the Euros. At 58, it would have been very easy for him to bide his time, since he clearly doesn't need the money. But, maybe, what he does need is the work. The daily routine of the training ground, the smell of the cut grass, the spin cycle of games and press conferences, the adrenaline that comes from prowling the touchline with millions of eyes on you and the power to influence a team to victory.

Mourinho was fired by Tottenham less than three weeks ago and despite saying he'd take his time, he's back in football with the AS Roma job. Jonathan Brady/PA Images via Getty Images

What's not in question is that, perhaps for the first time in his career, he has taken on a "ground-up" challenge and one that will require ingenuity, chutzpah and old-school daily management to turn into a success.

Porto was a natural stepping stone, the most successful team in Portugal at the time. At Chelsea, Inter, Real Madrid, he joined powerhouses that were either ready to spend big, or had already spent big and were happy to continue doing so. His return to Chelsea may have been an emotional choice, but it was also a well-funded one -- just like his move to Manchester United, when he got Paul Pogba, Zlatan Ibrahimovic, Henkrih Mkhitaryan and Eric Bailly in one go.

As for Spurs, sure, they were 14th in the table when he was appointed. But they had also finished in the top three for three straight seasons (including 2016-17, when they threw away their shot at winning the league), they were in the Champions League final just a few months before he arrived, and they had an owner building a massive stadium with plenty of bells and whistles (and the promise of more revenue and more investment).

So what about Roma? It's a different situation, and a different landscape. As a club, they've had their highs in recent seasons -- Roma reached the Champions League semifinal and finished second in 2016-17, but that was under different ownership and, crucially, before the revival of the Milanese clubs and the emergence of Atalanta. A top-four finish would have been remarkable this season, let alone next season.

It's hard to judge the Friedkins because they only took control in August and have been dealing with the pandemic, but it's safe to say they didn't lure Mourinho with the promise of massive transfer spending. Roma have made big losses in recent seasons. They've had to count pennies to not fall foul of Financial Fair Play, and their plan for a new stadium -- launched six years ago by then-owner Jim Pallotta -- has thus far all but drowned in red tape.

They have one of the most exciting young players in Europe, Nicolo Zaniolo, but he's been injured all season. They have some solid pieces who are either young or young-ish (Lorenzo Pellegrini, Gianluca Mancini, Marash Kumbulla, Gonzalo Villar), but this season they've leaned on Edin Dzeko (35), Pedro (33) and Mkhitaryan (32), all of whom are on big wages and none of whom is out of contract in the summer.

Then there's the fact that Mourinho's brand of football is pretty much the polar opposite to that played by the outgoing Roma boss, Paulo Fonseca, which is all high lines, pressing, possession and building from the back. And you can add in the fact that managing Roma is probably the single-most high-pressure job in Serie A. "Pressure" defined as in "fans showing up regularly outside the training ground, (sometimes to cheer, sometimes not so much), local media coverage that dwarfs any city other than Madrid or Barcelona in size and demands, and a city that makes it near-impossible for a player or manager to do most basic things like go to the corner store or get your hair cut at the local barber's."

This is what Mourinho has chosen for himself, and it won't be easy.

Was it an impulse decision, both by him and by the Friedkins? Maybe. But whatever else you think of him, it's a courageous one. For a guy who generally played the percentages when taking his next job, this is a serious departure. You can only wish him well for having the guts to take in this challenge.