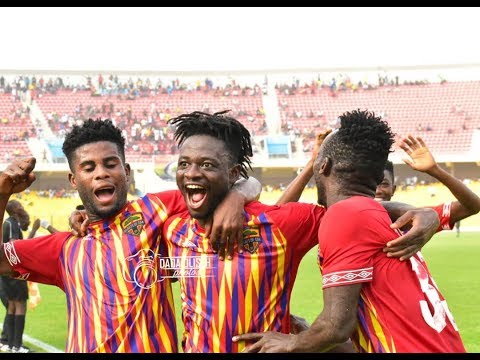 Hearts of Oak progressed to the semi-finals of the MTN FA Cup following a 1-0 win over Elmina Sharks at the Nduom Sports Stadium on Saturday.

Caleb Amankwah scored a beautiful free-kick to send the Phobians into the last four of the competition.

The referee ignored calls for the penalty and waved play on.

Daniel Afriyie suffered a nasty injury from a Sharks player with the forward needing medical attention with the game halted for some minutes.

Sharks goalkeeper Joseph Essam denied Hearts of Oak’s Salifu Ibrahim from scoring with a good save.

Hearts of Oak scored from open play through Daniel Afriyie Barnie by the goal was ruled out for offside.

Frederick Ansah Botchway with a glorious opportunity on the 30th minute to hand the 'Phobians' the lead but only resulted in a wasted effort.

The game ended goalless in the first half with the two sides failing to find the back of the net.

Hearts of Oak nearly got the opener in the second half but Afriyie Barnie effort went wide for a goalkick.

Hearts of Oak took the lead kind courtesy of a brilliant free kick from Caleb Amankwah from 30 yards to snatch the win for the away side.

James Bissue failed to convert his chance into goal from a set piece as Elmina Sharks exited the competition at home in the quarterfinals.