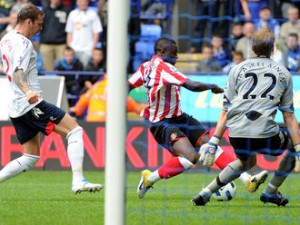 Ghana midfielder Sulley Muntari has been dropped from Inter Milan's squad for this year's Champions League, GHANAsoccernet.com can confirm.

This is the strongest message to the left-footed Ghanaian enforcer that he will not have playing time this season.

The 27-year-old is not part of the 31-man list the Italian giants sent to Uefa ahead of the start of the prestigious competition.

But Muntari has not been help by a new regulation by Uefa that seek to promote young European players in their home countries.

As per the new regulation, for the first phase of the 2011/12 Champions League four players must have progressed from the club's youth side.

There must also be four players from the Italian youth teams and six players must be current players of Inter's youth side.

Coach Gian Pierro Gasperniâ€™s message is a clear signal that despite his qualities, he must look for opportunities elsewhere.

Muntari opted to remain at Inter Milan after failing to secure a deal on Wednesdayâ€™s transfer deadline.

The 27-year-old has struggled to settle at the San Siro and has been a bit-part player in the club.

He was linked with English sides Tottenham Hotspur and Fulham but a last minute deal was not sealed.

The Ghana international lost his favourite number 11 jersey signifying the desire to axe him from the first team.

He spent last season on loan at English Premier League side Sunderland.