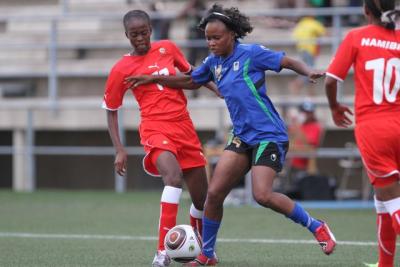 Namibia has named a 25-member squad to face Ghana in the first leg of the U-20 Womens World Cup on February 18 in Accra.

U-17 players who will be in action against South Africa in Johannesburg this weekend such as Lovisa Mulunga, Emma Naris, Anoushka Kordom, Anuschka Meyer, Melissa Matheus, Depney Noabes and Juliana BlouÂ have have all earned call-ups.

Other young players in the team include Lena Noreses, Lorraine Jossob and Albertha Dawes, who were recently given an opportunity to train and travel with the senior Brave Gladiators for their match against Tanzania.

â€œOur strategic plan for 2014 entails that we not only strengthen the pool of selection for players but also identify potential young and aspiring coaches to be part and parcel of the technical team and thus give them the necessary experience, under the guidance of myself and NFA technical director Klaus Staerk,â€ head coachÂ Jacqui Shipanga said.

Some of the selected coaches will accompany the technical team for the gameÂ againstÂ the Black Princesses.