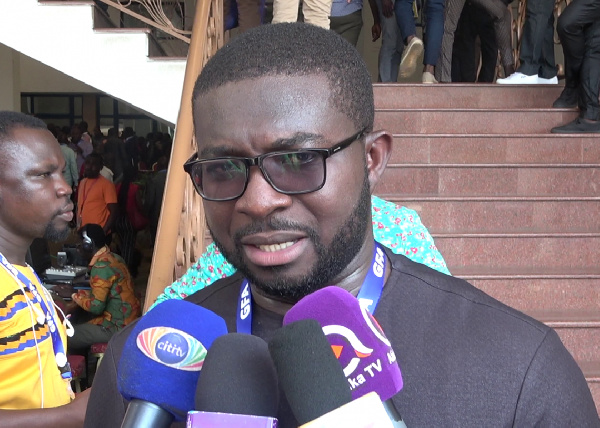 In the year 2017, a highly spirited, littered, knowledgeable and effervescent young man burst into the footballing circles and declares his intention to contest GFA Presidential polls in 2019 by releasing a solid manifesto captioned "Empowering the Football People and Decoding the Football People Tag" which details his vision for Ghana Football.

The President of Phar Rangers Football Club, Nana Yaw Amponsah who holds a Master's Degree (LLM) in Sports Law and Practice from the Leicester De Montfort University in the United Kingdom, is the only presidential aspirant till date to have brought his working document  which is a living organism capable of growth.

The highlight of his manifesto which hinges on 3 thematic points namely :Restoring the integrity of the game; development of grassroots football and commercialisation of our local league includes policies such as Transfer Fund for Clubs, 64 Training Pitches for All League Clubs, One League Centre One Ambulance, Enrolment of our leagues on international statistical and video analytical platforms, Establishment of regional academies using existing SHS, Branding Women's Football, Training of developmental Coaches,Referees , Players, Schools and Colleges, Integrating Corporate Ghana, Involving other Stakeholders such as Fans and Media.

Just as Jesus Christ encumbered resistance from the Pharisees and Sadducees when they realised Jesus' fame was soaring high and the multitude were believing him to be the Messiah, so is Nana Yaw encountering from his detractors who now see his sermon on why he wants to be the GFA Capo and how he intends to transform the state of our local game have been accepted by  the members of the Football family, are now working relentlessly to impute a wrong doing  on his person.

The opponents see him as the most likely candidate to ascend the throne since he is the only candidate who cannot be associated with the current dying state of our game.He is the true symbol of change from the old order. The only way they can find fault about him to deny Ghanaians of his transparent, effective and efficient leadership is to brand him as an intermediary, a role he abandoned in 2018.

The opponents are imputing the following unfounded and unscrupulous  allegations against Nana Yaw Amponsah:

1. That he was registered by the English FA to represent players in 2008. This is incorrect . He was rather licensed by the GFA as FA licensed agent in 2008 to 2013 and later became an English FA intermediary in 2014.

3. That Nana Yaw signed a contract with Abdul Latif Abubakar on September 30, 2018 for 2 years, thus he still holds an intermediary position. A microscopic look into the new  FIFA intermediary role which began on April 1, 2015 requires that all contracts should be entered into the national registration system. And that if a contract is not entered into the system after 5 days, it makes the contract invalid. This contract failed to meet the required registration time and was not registered in the system.

4. That he transfers players and takes commission between (10-15)% which is contrary to FIFA rule. They ground their argument on Article 7(3)(a) of FIFA regulation on payments to intermediaries which states: the total amount of remuneration per transaction due to intermediaries who have been engaged to act on a player's behalf should not exceed 3% of the player's basic gross income for the entire duration of the relevant  employment contract.

They cunningly quote the above article in isolation without reference to the Stem Article 7(3) which states that while taking into account the relevant  national regulations and any mandatory provisions of national and international laws, and as a RECOMMENDATION, players and clubs MAY adopt the following benchmarks: This Article clearly shows that the remuneration to intermediaries captured in Article 7(3)(a) is not MANDATORY  but SUGGESTIVE. In our part of the world where intermediaries cater for airfares of players for trials abroad, their accommodation and feeding until they secure the supposed contracts, it will appear unreasonable to say that they should be entitled to only the suggested 3% commission by FIFA . However, the agreed percentage in the contract between the client and intermediary is always the case.

5. They also attempt to imply that he doesn't  qualify to contest because of the point 2 in the declaration by intermediaries which states: I declare that I am currently not holding a position of official, as defined in point 11 of the Definitions section of the FIFA Statutes, nor will I hold such a position in the foreseeable future. For Christ sake, this is a requisition to become or to be registered as an intermediary which he satisfied in 2014 when he wanted to be so. As of that time, he was not holding any official position and couldn't have foreseen that he was going to be a club president in 2016.

*From the foregoing analyses, a clear distinction should be made between the old FIFA/FA licensee which existed in 1996 until it was extinguished by the new intermediary which came into effect on April 1, 2015.

That Associations must be satisfied that in carrying out the activities of the intermediary, the intermediary contracted by a club and/or a player has no contractual relationship with leagues, associations,confederations or FIFA that could lead to a potential conflict of interest. Intermediaries are precluded from implying directly or indirectly, that such a contractual relationship with leagues, associations, confederations or FIFA exists in connection with their activities.

It is jurisdictional. Thus an intermediary in England can be in a potential conflict of interest situation with the leagues and association of England BUT NOT that of Ghana. Similarly, he cannot transfer players from Ghana to Slovenia if he is not an intermediary in Slovenia unless he registers in Slovenia to enable him undertake the transaction.

If you hate the duker, you must admire it for its swiftness. Nana Yaw Amponsah is a God fearing person who truly understands the football business, he is deeply connected locally and internationally to the movers and shakers of the football family, thus enhancing his chances of securing funding and sponsorship to improve the quality and standard of the game, he is a corporate person who will decode the Football People Tag and bring all and sundry on board to develop the game, he has the arsenal to resurrect colts football from grass to grace, he will empower clubs to be at a pedestal to enable them have huge share of this global multi-billion dollar industry, and has already started empowering our women in the game.

He recently introduced a Turkish company Fitcom who have signed sponsorship contracts with over 40 clubs in Division 1 , Premier and Female Premier Leagues.

Nana Yaw, ignore the naysayers and detractors, soldier on until you get to the promised land. Posterity will be the best judge. Most Ghanaians are behind you.