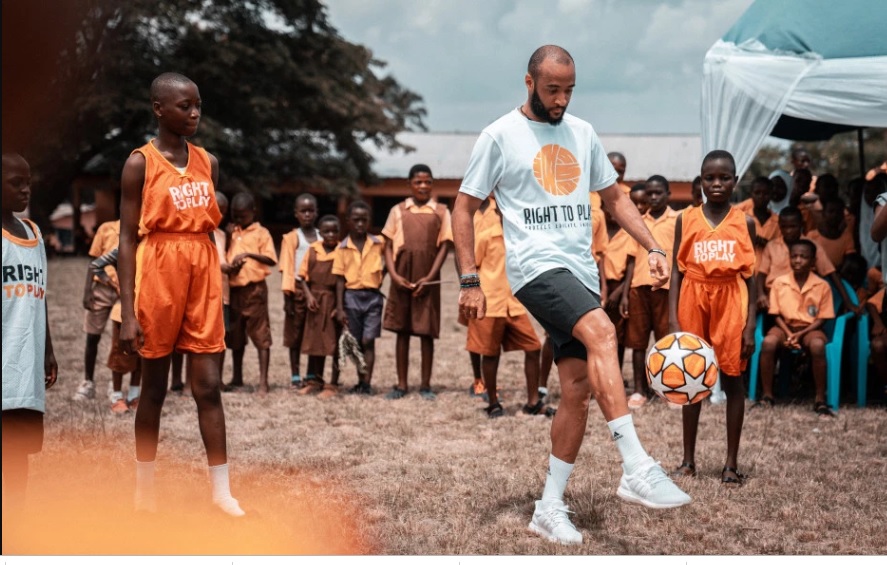 Nathan Redmond was at Heathrow when a call from an FA official came in last Thursday.

Out of the blue, the Southampton forward was told he had been rewarded for his excellent displays with inclusion in Gareth Southgate’s Nations League squad in Portugal next month.

Yet Redmond was not at the airport ready to jet off on his summer holidays.

In fact he had just returned from a whistle-stop, self-funded charity trip to Africa.

The 25-year-old donates more than £1,000 to the charity Right to Play every time he scores or gets an assist.

And every donation gives as many as 33 children access to the organisation’s programmes for a year.

Redmond used the start of the close-season to travel to Ghana.

Flying out on Monday, May 13 — the day after scoring on the final day of the season against Huddersfield — Redmond travelled with officials to the nation’s capital city Accra.

In his capacity as a global ambassador for the Right To Play charity, he visited schools and took part in literacy, numeracy and PE lessons as well as playing in a mixed-gender football match.

The charity has programmes in 15 countries, works in more than 2,600 schools globally and operates in 52 refugee camps in Ethiopia, Jordan, Lebanon, the Palestinian Territories, Thailand and Uganda.

In some of the world’s most dangerous places, programmes use sport to empower, protect and educate 1.9million disadvantaged and underprivileged children who have been affected by poverty, conflict and disease.

Redmond said: “This was organised and planned for the last few months. It was always the plan when the season finished I’d come here and really experience some of the stuff the charity is doing.

“It’s my first time in Africa. It has been very cultural, I have enjoyed every single moment.

“I’ve been to a lot of the rural areas and seen a lot of kids and teachers who have been impacted.

“I invest a lot of my spare time in the charity.

“I felt it would be beneficial to go and see projects on the ground so I know where donations are going to.

“What I saw here in Ghana was unbelievable, life-changing in many ways.

“Despite daily adversity, limitations and odds, there are some amazing kids, teachers and programmes that are determined to make a real change.”

Redmond, who was brought up in Birmingham by his single mum Michelle, is a Premier League footballer with a conscience.

And his association with the charity is clearly a lucky charm — nine goals in all competitions represents his best-ever season and he ended up as top scorer for Ralph Hasenhuttl’s side as they eased away from relegation trouble.

Against Wolves last month, he wore a pair of customised Right To Play boots in aid of the International Day of Sport for Development and Peace — and duly scored two goals in a 3-1 home win.

Redmond, who will be hoping to add to his one England cap in the Nations League, said: “Football has shaped my whole life and I feel passionately about the power of sport and playing it to change lives.

“Through sport you learn about respect and hard work, you learn about trust and working together, you grow confidence in yourself and learn that you can make a difference and shape your own future.

“I believe every child deserves the chance to succeed and reach their potential. One goal puts many children into the programme for the year, so it’s education within sport.