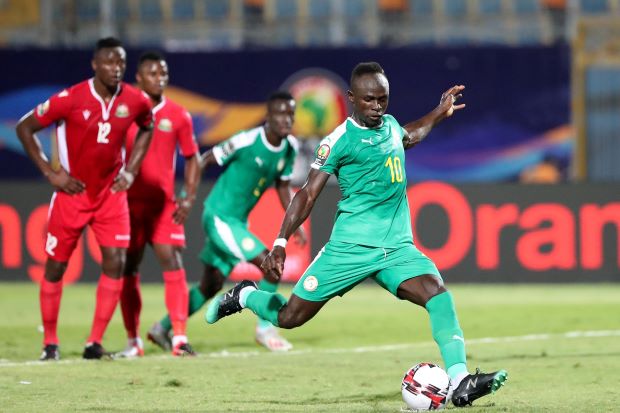 Troubled by chaos behind the scenes, played in baking heat against a backdrop of empty stadiums, the Africa Cup of Nations (AFCON) has still managed to serve up some entertainment and drama in its expanded 24-team group stage.

World class players such as Sadio Mane, Mohamed Salah and Riyad Mahrez have shared the stage with the likes of Jean Romario Baggio Rakotoarisoa, who plays in Madagascar's ramshackle league, and Selemani Ndikumana, who lived through the long civil war which ravaged Burundi until 2005.

The tournament began with what has become almost a traditional prelude -- a team arguing over bonuses.

Cameroon initially refused to fly to Egypt and, even when they were eventually persuaded to travel, the players said they were still not satisfied with the offer. Pay disputes subsequently affected Nigeria, Zimbabwe and Uganda.

Newcomers Madagascar provided romance as they beat Nigeria on the way to topping their group -- a remarkable achievement for a motley collection of players from the lower leagues in France and clubs in Belgium, Bulgaria and the United States, and led by former French fourth-tier coach Nicolas Dupuis.

The most impressive sides were the North African trio of Egypt, Morocco and Algeria who all topped their groups with a 100 percent record and without conceding any goals.

Algeria looked particularly strong although it was not pretty as they committed an average of 28 fouls a match, according to official statistics.

Other favourites were not so convincing.

Nigeria were plunged into a knockout tie against neighbours and bitter rivals Cameroon who also finished second in their group after two successive goalless draws.

Tunisia were their usual dour selves, drawing all of their games, while Ghana's performance in topping their group with one win and two draws failed to silence the critics.

"I do the best I can to win all the matches but at the end you still have people who hate you or are jealous of you," said coach Kwesi Appiah.

The least memorable day was last Saturday when all three games ended goalless. In contrast, Kenya beat Tanzania 3-2 in an incredibly open game which both coaches described as "crazy" and said they were rendered "helpless" by the players' wild abandon.

To see any football at all was a relief given the problematic build-up.

Incredibly, the venue, timing and size of the tournament have all changed since the draw for the qualifying competition was made in January 2017.

Originally scheduled to be staged by Cameroon in January with 16 teams, the Confederation of African Football (CAF) has since increased the tournament to 24 teams, moved it to June-July and stripped Cameroon of the hosting rights due to slow preparations and security concerns.

The problems peaked on the eve of the finals when, in an unprecedented move, soccer's world governing body FIFA took over the running of CAF in the wake of corruption allegations and an ethics investigation was launched into its Malagasy president Ahmad Ahmad.

Ahmad has not responded to repeated requests by Reuters for comment on the allegations against him.

The decision to play in the brutal Egyptian summer also raised eyebrows although the players seemed to cope.

"We have never reached the WGBT temperature during the competition," he said, adding that low humidity had helped.

Stadiums for many games were almost deserted, lending a strange backdrop.

A complex and unreliable ticketing system, modelled on last year's World Cup, requiring fans to register and buy tickets online has been partly blamed along with local indifference to matches not involving the host nation.

For some, the quirks were just part of the appeal.

"I am having a great time," said Cameroon's Clarence Seedorf, one of the highest-profile coaches at the tournament. "I think it is wonderful to live this tournament here and every day is an adventure."