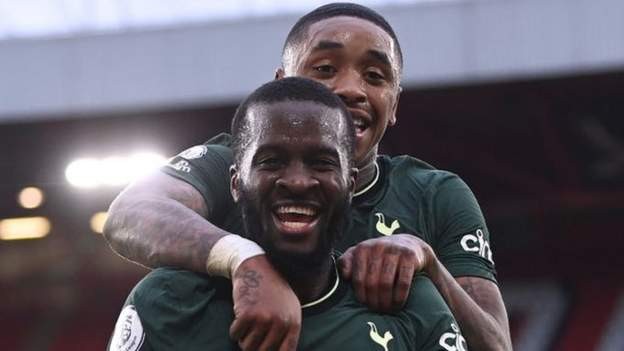 When Tanguy Ndombele was substituted at half-time in a game against Burnley last March and then publicly criticised by his manager Jose Mourinho, it looked like the midfielder's time at Tottenham was coming to an end.

Signed for a club record £54m from Lyon in July 2019, the 24-year-old appeared destined to be remembered as an expensive flop as he was reduced to a bit-part player at Spurs in his first season under Mourinho.

But barely a year later his turnaround has been as impressive as it has swift, developing into a key player for Spurs with an eye for an excellent pass and capable of sublime moments of magic - highlighted by his stunning goal in Sunday's 3-1 win at Sheffield United.

With the Blades having just pulled a goal back to make it 2-1 and threaten an unlikely comeback, Ndombele hooked a brilliant, improvised lob over Aaron Ramsdale to make the win safe for Spurs and get their top four challenge back on track.

"He is incredible," said Mourinho after the game. "For me sometimes you can score a great goal isolated from your performance - in this case the goal confirmed his performance, really, really good."

So how has Ndombele gone from Spurs outcast to key player?

When Ndombele first arrived at Spurs two summers ago he initially made the right impression, scoring on his debut in a 3-1 win against Aston Villa.

Ndombele impressed with his strength and eye for a pass but soon found himself in and out of the side as he struggled with niggling injuries and poor fitness.

From then on he found game time limited and, after his half-time withdrawal against Burnley and stinging comments from Mourinho in which he said Ndombele's performance in that game was like "having no midfield", it could have been easy for the France international to give up hope of ever making a career for himself at Spurs.

But in the Amazon 'All or Northing' series, Ndombele was shown having a meeting with Tottenham chairman Daniel Levy last summer during which Levy told the Frenchman that the club wanted to keep him but he had to prove himself.

That appeared to spark a change in Ndombele's mindset as he made a determined effort to prove his critics wrong, an attitude Mourinho believes he deserves full credit for.

"The door is always open, but the player cannot expect for me to go and bring him. It has to be for the player to walk through that door, and come in the direction of what the team needs from him."

More freedom to express or a change in position?View more on twitter

Ndombele arrived at Tottenham as a ball-playing midfielder - one who could help turn defence into attack - and the role he plays has not changed from his difficult first season to his - so far - sublime second.

Indeed, a look at a direct comparison between his statistics from 2019-20 to the current campaign does not show much of an improvement.

But a big factor in his upturn in form this season has been having a proper holding midfielder alongside him in Pierre-Emile Hojbjerg.

That has allowed Ndombele to get forward more and flourish in the areas he is more comfortable in, using his pace to quickly carry the ball up the pitch.

Ndombele and his team-mates are now reaping the rewards of that freedom he now has.

"This guy, he always touches the ball and something happens," Spurs full-back Serge Aurier said.

"I am happy for him, he played well and scored an amazing goal."

Ndombele has previously been described as having the ability to become one of the best midfielders in the world. It now appears that he is firmly on the right path to realising that potential.