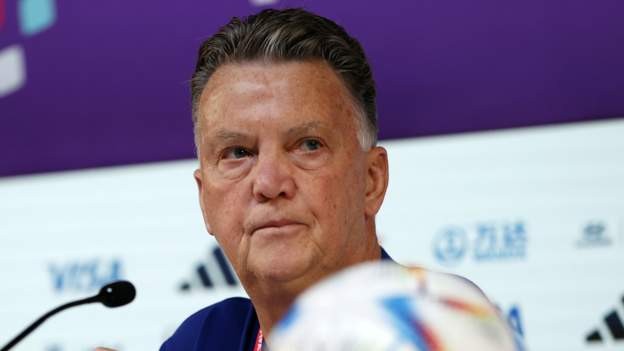 The Netherlands will not mirror Germany's protest at the World Cup when they play Ecuador on Friday, says manager Louis van Gaal.

Germany's players covered their mouths before their game against Japan to show that "Fifa is silencing" teams, according to their coach Hansi Flick.

The gesture followed Fifa threatening players with a booking for wearing the OneLove armband during games in Qatar.

"No," said Van Gaal when asked if his team were planning any protest.

"We put a full stop after all the political issues last Thursday. We have this purpose and we're not going to have that tarnished by the actions of Fifa, or whichever other organisation.

Why is the Qatar 2022 World Cup controversial?

The Netherlands began the OneLove campaign before Euro 2020 to promote diversity and inclusion, and as a message against discrimination.

"We paid a lot of attention to this [OneLove]," said defender Denzel Dumfries. "Over the past few weeks, we've really talked about it a lot. But we came to Qatar to play football. That's what we're focusing on.

"We've said what we need to say, and from now on we need to concentrate on playing football."

The Netherlands beat Senegal 2-0 in their 2022 World Cup opener.

Barcelona forward Memphis Depay came on as a substitute in that game after two months out with a hamstring injury.

"He has played 30 minutes and the next step would be 45 minutes," said Van Gaal.

"The injury he has makes it so difficult to decide when he can start. But he is an extraordinary player and so I have set aside my principles because I consider him to be incredibly important to my team.

"I explained this to the players, that I am doing all this for Memphis, and the players accepted this."