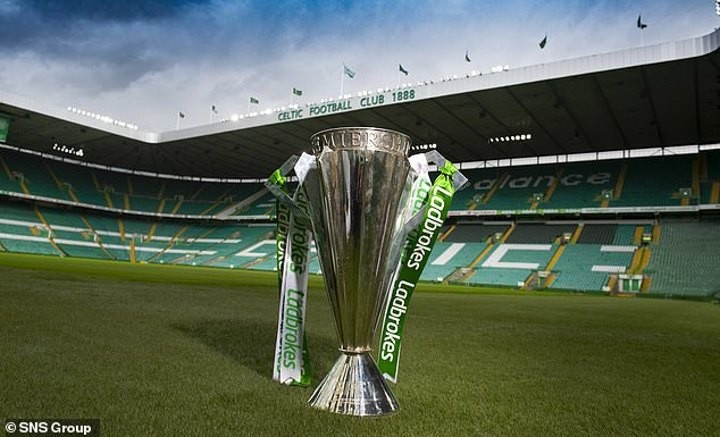 Scottish football has been granted a green light to start the new SPFL Premiership league season behind closed doors on August 1.

The SFA and SPFL Joint Response Group presented their plan to lift the suspension of the Premiership game to Minister for Public Health, Sport and Wellbeing Joe FitzPatrick, and National Clinical Director Professor Jason Leitch during a video conference call on Friday.

The English Premier League is scheduled to get back underway on Wednesday, June 17.

And, as Sportsmail reported, SFA chief Ian Maxwell and Neil Doncaster of the SPFL set out a route map for Scotland to follow suit when a new £125million record Sky Sports contract kicks in on Saturday, August 1.

Receiving the all-clear for professional clubs to begin pre-season training from June 11, the Joint Response Group will circulate guidelines to Premiership clubs to ensure training grounds and stadia are equipped to deal with the new safety regime next week.

Players will undertake a phased pre-season training programme, with individual programmes, before staged moves towards group and full squad sessions ahead of the new kick-off date.

In a statement, the JRG admitted they still can’t say when the lower leagues will be able to kick off or when supporters will return to grounds.

Planning for a ‘gradual reintroduction’ of supporters, a best-case scenario could see fans return to neutral, socially-distanced hubs in restricted numbers from October onwards.

Welcoming the outcome of the talks, SPFL chief Neil Doncaster said: ‘We are delighted that the Scottish Government have given the green light to the resumption of football training in June.

‘We now have a firm target of starting the 2020/21 Premiership season on the weekend of August 1 and that’s a major step forward. We will continue working with the Championship, League One and League Two to gauge their ability to start the season and if so, when — which may vary hugely between clubs.

‘We clearly welcome the prospect of resuming matches, but we have to take all necessary steps to ensure we can have a sustainable league campaign. That means a safety-first approach, with games initially played behind closed doors and a range of measures to protect players and staff.

‘We all want to see the return of crowds and we’ll be working with clubs, government and medical professionals to return safely to playing in front of fans as soon as we can.’

SFA counterpart Maxwell added: ‘I would like to thank the minister and the National Clinical Director for Scotland for their receptiveness to our proposal.

‘A return to professional football has been the culmination of weeks of hard work from across the game from people whose workloads and demands have already been increased to cope with the impact of Covid-19 on their clubs or areas of work within Scottish football.

‘In particular, I would like to thank our Chief Medical Consultant, Dr John MacLean, for his invaluable input throughout this process.

‘As a JRG member and co-chair of the medical sub group, he has overseen creation of a comprehensive strategy for testing procedures and safe ‘return to training’ and ‘return to playing’ protocols that have given confidence that the Scottish Premiership can kick-off in August.

‘As the governing body, we will continue to engage with government and key stakeholders to provide a similar plan for the return of the game at all levels of Scottish football. While acknowledging that the current testing regime required to be observed will be prohibitive for most clubs outwith the Premiership at this time, we are aware that there are hundreds of thousands of players across the Scottish football landscape looking for clarity on when they can return to action.

‘In particular, the paused Scottish Women’s Premier League is keen to restart and we will be discussing with stakeholders the process to restart the women’s senor game in line with the government’s route map out of lockdown.

‘Conversations will continue in the coming weeks to outline a pragmatic approach for the whole game and we will communicate those developments at the appropriate time.’