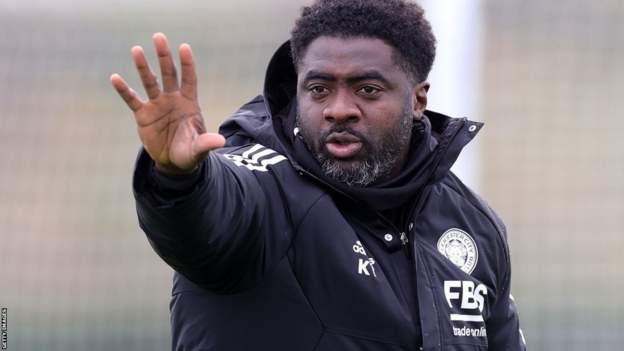 Kolo Toure paid homage to his "mentor" Brendan Rodgers after being unveiled at Wigan Athletic in his first managerial position.

Toure, 41, left his coaching role under Rodgers at Leicester City to sign a three-and-a-half-year contract with the Championship club.

The former Arsenal and Manchester City defender becomes the fourth black manager in the second tier.

The former centre-half played under Rodgers at Liverpool and Celtic before hanging up his boots and moving into the backroom staff at the Glasgow club in 2017. He most recently became Rodgers' assistant with the Foxes.

"He [Rodgers] is my mentor really and I have been working with him and learning from him and I want to thank him and his staff from Leicester City and firstly Celtic, because that is where my coaching career started," Toure told BBC Sport at his first news conference.

"I finished my career as a football player without a break and went straight into coaching with Brendan. I have been with him for nearly five years and it was the process for me.

"To be a good football player doesn't mean you will be a good coach, and that is why I needed to work with a top manager like Rodgers. Then I had to learn all of the skill a manager needs to make sure he can implement the best quality possible to help his players.

"When Wigan come, you cannot turn that down when you have been waiting for five years."

He is joined by first-team coaches Ashvir Johal, who he worked with at Leicester, and black former manager of Crawley Town Kevin Betsy in a diverse dugout.

Johal wears a Patka - a traditional head covering worn by Sikhs - and is the first Sikh to hold a senior coaching role in England's professional game.

Asked if his new job would help inspire members of the Sikh community to follow his path, Johal said: "There are a lot of talented people from a Sikh background in football, whether that is at grassroots level or in professional football.

"My primary aim is to help the team in training and in games with the quality of my work. If that inspires other people from a Sikh background, that will be pleasing, but that has got to be from my work."

Toure says his coaches are "young and hungry" and want to make players better.

"They are great coaches and that is the most important thing," he said.

"They are young and hungry and they want to make players better. They are tactically good and technically good.

"We know where we want to go and we will give everything every single day to make the club better. We have a good group of players that are honest and work hard and I want to make sure we give 100% for the fans of this football club."

Toure inherits a Wigan team in the relegation places in the Championship, with his first game in charge away at Millwall on Saturday.