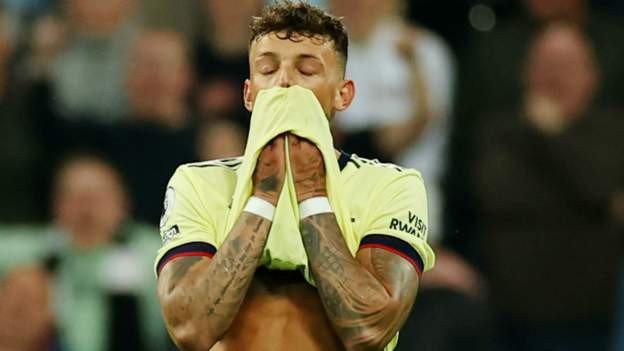 Arsenal's hopes of finishing in the Premier League top four were dealt a huge blow as they were well beaten by Newcastle at St James' Park.

Mikel Arteta's side needed a win to move above Tottenham into fourth and put them in the driving seat to secure a Champions League spot heading into the final weekend of the season.

But they were second best throughout and fell behind early in the second half when Ben White turned the ball into his own net under pressure from Callum Wilson, who was making his first start since 27 December.

Bruno Guimaraes, who has become a cult hero since joining Newcastle at the start of this year, then rounded off the impressive win when he drove into the net as Arsenal struggled to clear.

Arsenal offered next to nothing, with Martin Dubravka only really tested once, with a 25-yard Mohamed Elneny shot in the second half.

Indeed, Newcastle could have won by more with Wilson coming so close to capping a dream return from injury with a stunning long-range effort that dropped just wide of the goal.

The result, which also confirmed Chelsea's finish in the top four, means Arsenal must beat Everton in their final game of the season on Sunday (16:00 BST) and hope Tottenham lose at relegated Norwich.

Newcastle, meanwhile, round off a season that provides encouragement for the future with a trip to Burnley.

Arsenal needed to show up but failed

Arsenal needed a big performance if they were to give their fans hope of finishing in the top four, particuarly after they were well beaten by their fierce rivals Tottenham in last Thursday's north London derby.

Unfortunately, Arteta's side wilted when it mattered most as they were outplayed by Newcastle.

The Gunners were poor throughout the first half as they repeatedly gave the ball away and were having to repel a stream of Newcastle attacks while struggling to build their own opportunities.

They managed to get to get to half-time level but did not heed the warning signs and fell behind just before the hour mark.

Wilson had been a menace throughout as he showed no signs of rustiness on his return to the first team. It was no surprise he was involved in the opener as White turned the ball into his own net as he attempted to prevent the Newcastle forward from getting a shot off.

Arteta was unable to hide his frustrations with the officiating against Spurs - a match in which his team conceded a penalty and had defender Rob Holding sent off - but he can have no complaints here as they were undone by a side who simply showed more hunger and quality.

Attempt missed. Dwight Gayle (Newcastle United) right footed shot from the right side of the six yard box is too high. Assisted by Sean Longstaff.

Attempt saved. Ryan Fraser (Newcastle United) right footed shot from the centre of the box is saved in the bottom right corner. Assisted by Dwight Gayle.

Granit Xhaka (Arsenal) is shown the yellow card for a bad foul.

Bruno Guimarães (Newcastle United) wins a free kick in the defensive half.

Attempt missed. Cédric Soares (Arsenal) right footed shot from outside the box is high and wide to the right. Assisted by Mohamed Elneny.

Callum Wilson (Newcastle United) wins a free kick in the defensive half.

Bruno Guimarães (Newcastle United) wins a free kick in the defensive half.