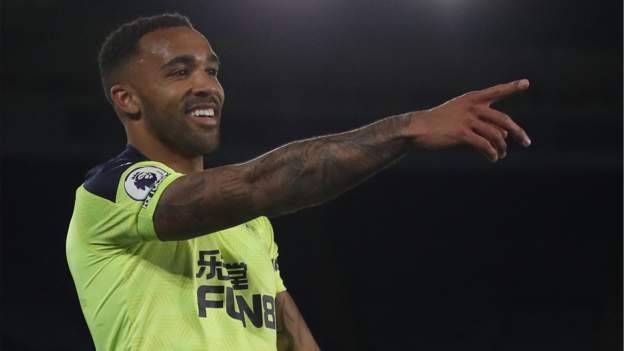 Newcastle moved to within one point of Premier League safety with an impressive win over Champions League-chasing Leicester City.

Joe Willock put the visitors ahead with a cool finish after pouncing on an error from Foxes defender Caglar Soyuncu.

From 4-0 down, the hosts grabbed two goals inside the last 10 minutes through Marc Albrighton and Kelechi Iheanacho to give the Magpies a late scare.

The result moves Steve Bruce's side up to 13th, 12 points ahead of 18th-placed Fulham who have four games left.

Leicester, in third, remain five points ahead of fifth-placed West Ham but have now played a game more.

The evening started badly for Leicester when they were forced into a last-minute change minutes before kick-off, and things only went downhill from there.

Albrighton started in place of Jonny Evans, who limped down the tunnel after picking up an injury in the warm-up.

Two goal-bound efforts from Federico Fernandez and Kelechi Iheanacho were saved by Newcastle goalkeeper Martin Dubravka in the early stages.

Dubravka was eventually beaten late in the second half, first by Albrighton's impressive strike from the edge of the box, followed by a low effort into the bottom right corner from Iheanacho. However, by then the damage had been done.

Manager Brendan Rodgers must be desperate to avoid a repeat of 2019-20, when they missed out on a place in the Champions League on the final day having spent almost all the season in the top four.

They have a tough conclusion to this season, visiting second-placed Manchester United on Tuesday and then travelling to fourth-placed Chelsea on 18 May, three days after facing them in the FA Cup final.

Leicester's final Premier League game is at home to Tottenham, who are sixth, on 23 May.

Attempt saved. Callum Wilson (Newcastle United) right footed shot from outside the box is saved in the centre of the goal. Assisted by Federico Fernández with a headed pass.

Joelinton (Newcastle United) wins a free kick in the attacking half.

Attempt missed. Jamie Vardy (Leicester City) header from a difficult angle on the left is too high. Assisted by Marc Albrighton with a cross.

Attempt saved. Ayoze Pérez (Leicester City) right footed shot from the left side of the six yard box is saved in the centre of the goal. Assisted by Luke Thomas.

Attempt missed. Luke Thomas (Leicester City) header from the centre of the box misses to the left following a set piece situation.

Nampalys Mendy (Leicester City) wins a free kick in the attacking half.

Attempt blocked. Ayoze Pérez (Leicester City) right footed shot from the right side of the box is blocked. Assisted by Marc Albrighton with a cross.

Ayoze Pérez (Leicester City) wins a free kick in the defensive half.