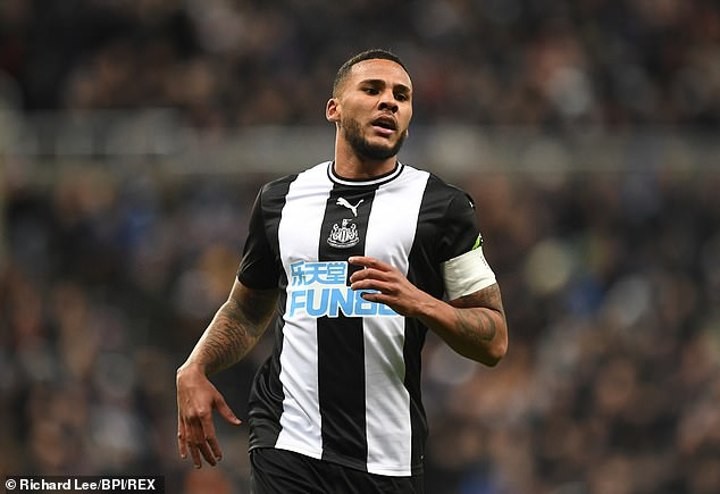 Jamaal Lascelles has insisted Newcastle's squad are ready to re-enter Premier League action despite team-mate Danny Rose's fears that players are being treated like 'lab rats'.

The top flight's ambitious Project Restart proposals may have concerned Rose, but Lascelles is adamant that Steve Bruce's charges are 'fully motivated' to complete the season amid the coronavirus pandemic.

Newcastle's players have begun training in small groups over the past week, whilst adhering to social distancing, as the top flight edges closer to returning behind closed doors.

Lascelles also revealed how Newcastle are gearing up for their remaining fixtures, and admitted to struggling to adapt during his time away due to lockdown.

He said: 'We are ready to go. We are still motivated and have nine games to finish off.

'It has been strange seeing the staff with personal protective equipment stuff on.

'It is four to a pitch so we have social distancing. It is strange, but definitely nice to get things going again.

'It has been tough being away, but there are people losing their lives and in worse situations. We have kept fit, stuck to the programme and I have had quality time with my son.'

The Newcastle captain also weighed in on the shocking figures concerning BAME individuals and the risk posed to them during the health crisis.

Data from the UK Office for National Statistics suggested that black, Asian and minority ethnic patients are four times more likely to die from Covid-19 - but Lascelles revealed he feels secure at the club's training complex.

He added: 'I know black people who have had it and got rid of it straight away and been completely fine, then on the other hand you hear it is more dangerous.

'Then you hear about middle-aged people with no underlying health issues dying from it. It's really confusing for me.

'We know the training ground is as safe as anything. Everyone has tested negative.'