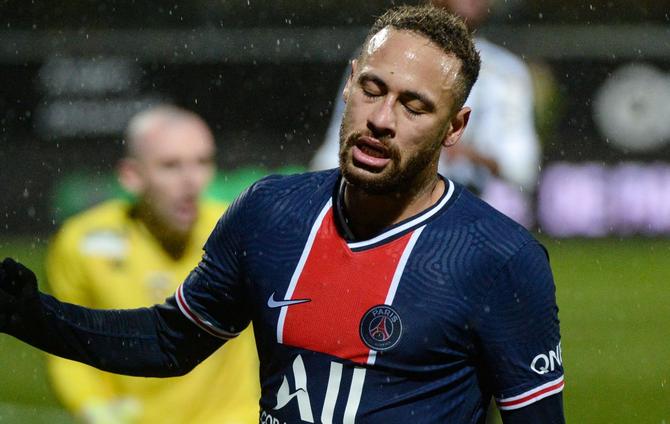 Paris Saint-Germain star Neymar is a doubt for Sunday's Ligue 1 match with Marseille after missing training through illness.

The Brazil international sat out Saturday's session due to gastroenteritis and his condition will be assessed later, PSG said in a statement.

Teenage defender Timothee Pembele will be unavailable after returning a positive coronavirus test, with the 18-year-old now self-isolating.

The champions will also be without Keylor Navas and Ander Herrera for Sunday's Classique, with neither player fully fit.

Colin Dagba (thigh) and Juan Bernat (knee) are still out, while Abdou Diallo remains sidelined due to coronavirus protocols after testing positive a week ago.

PSG, who are three points behind league leaders Lille after 23 games, are still favourites for Sunday's game against struggling Marseille.

OM suspended coach Andre Villas-Boas this week after he offered his resignation in protest against the club's "sporting direction", with Olivier Ntcham signed from Celtic without his consent.

Marseille, who are ninth, have won just once in their previous 10 matches in all competitions and lost 2-1 to PSG in the Trophee des Champions match on January 13.

This will be the 100th competitive meeting between the teams, with PSG leading the head-to-head record with 44 wins to 33, 18 of which have come since Qatar Sports Investment took over at Parc des Princes in 2011.

However, Marseille won the reverse game this season 1-0 in September and the potential loss of Neymar could be key, the 29-year-old having scored 11 goals in his previous nine games in all competitions.