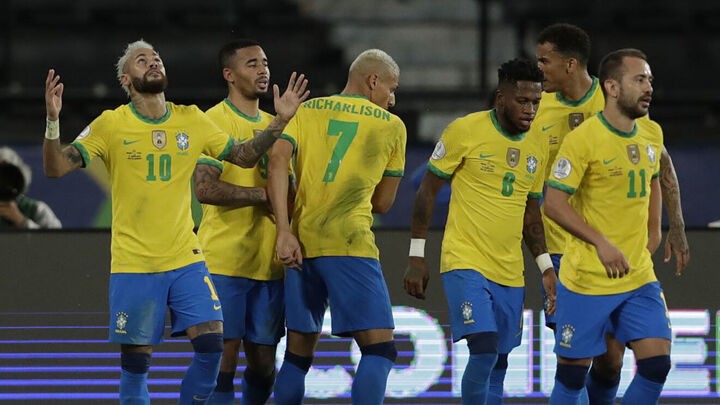 Brazil reached the quarter-finals of the Copa America with a resounding 4-0 victory over Peru at the Estadio Nilton Santos on Thursday evening.

Neymar was the star of the show in Rio de Janeiro, with a stunning display rewarded by the second goal of the night after Alex Sandro's opener, before late strikes from Everton Ribeiro and Richarlison capped off a brilliant performance.

Although Tite made six changes from the side that beat Venezuela last time out, Brazil lost none of their fluency and intensity here, and their early pressure was rewarded after 12 minutes.

A lofted Peru header found its way to Gabriel Jesus at the back post, as his first-time cross was fired home from close range by Alex Sandro.

Neymar doubled his side's lead midway through the second half, receiving the ball from Fred on the edge of the area before crashing a shot into the bottom corner beyond Jose Carvallo's dive.

The score was 3-0 on 89 minutes, as Richarlison's perfectly weighted ball across the penalty area was slid home by Everton.

Richarlison just had time to add a fourth, firing home his second rebound as Brazil advanced to the next stage of the Copa America.