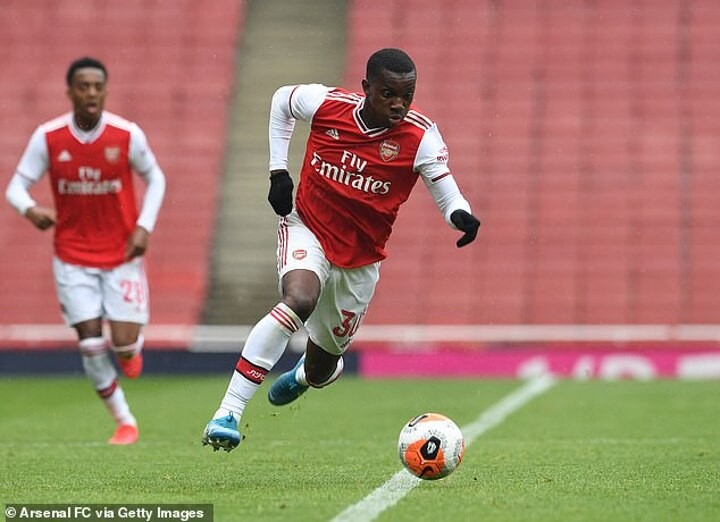 Things haven't gone too badly for Eddie Nketiah since he left Leeds in January.

He returned to the Emirates with a new manager, Mikel Arteta, in the dugout and finished off the season with 17 first-team appearances and an FA Cup winners medal. This season he's built on his promise by playing 14 times already - the only Arsenal player to have featured in every game.

Nketiah, still only 21, is coming along slowly but his quality is obvious. In October, he broke Alan Shearer's record to become the all-time leading goalscorer for England U21 after netting his 14th goal in 12 games.

The forward looks to have the world at his feet. It's hard to understand, therefore, why it went so wrong at Elland Road.

A player with Nketiah's skill, pace and eye for goal should have thrived in a Marcelo Bielsa team but he was never able to cement a place in the starting XI. It was his lack of game time that prompted to Arsenal to cut his loan short mid-way through the season.

Nketiah's spell in West Yorkshire started well enough. He scored on his debut in the Carabao Cup against Salford and he followed that up by coming off the bench to get the winner in a 1-0 victory over Brentford.

He grabbed another two goals in his next four games, despite being limited to substitute appearances.

With Bielsa reluctant to drop Patrick Bamford, Nketiah was not handed his first league start until December - when Bamford was unavailable.

He started the following game against West Brom but that would be his final match for the club.

While Bamford has made a blistering start to the current Premier League season with seven goals in eight games, he was not regularly finding the net in the first half of the 2019-2020 campaign. He went 10 games without a goal from August to November but it did not lead Bielsa to drop him.

When asked why Nketiah was not seemingly getting a look in, Bielsa seemed to suggest it was an issue with his attitude and work rate.

'Big teams, like Arsenal, they have a lot of players that can win one match with one play. This is natural, Nketiah has developed in this school,' he said.

'And he has all the resources, skills, to resolve the needs of scoring one goal. But we need to build the chance at goal. And we cannot build the chances if we don’t have a structure within all the players to create the chances.

'Nketiah is very good at scoring, also Bamford. But Bamford is missing chances. There’s a fact about what happens before you score a goal. You build a situation that allows the chance.

'What I’m looking to achieve is that Eddie feels the needs of the team. If he doesn’t put the metres in for both things he’s going to have less chances to score.'

Bielsa is renowned for his intense training methods and demanding high standards. The players that play for him have to be incredibly fit and physically strong.

Nketiah had come from an Arsenal team managed by Unai Emery. He does not have the same reputation for drilling his sides like Bielsa does.

Bamford, however, was familiar with the expectations of his manager having worked with him the previous season.

It's fair to suggest Nketiah was probably not used to the demands of the Argentine.

In November, he picked up an injury that ruled him out for the rest of the month, possibly as a consequence of the intense training.

When he was recalled by Arsenal, Nketiah had started just two league games.

Despite not playing him regularly, Bielsa was disappointed when the striker left Elland Road but said no player could be guaranteed game time.

'It is a pity for us that he is leaving us because we were happy with him,' Bielsa said in January.

'I don’t know the reasons that made Arsenal decide Eddie doesn’t continue with us, but if the reason is that he didn’t play enough, nobody can guarantee to a player the quantity of minutes he will have and nobody can say to one player he is not going to have competition in the position.'

Nketiah may not have got as many minutes as he desired, but his loan spell at Leeds has had its benefits. Arteta has implemented a similar pressing style to Bielsa's side since he arrived at the Emirates so when Nketiah returned he was at least familiar with those tactics, making for an easier transition.

The striker also returned to Arsenal a fitter and more determined player and it seems Bielsa's comments about him working harder for the team have had an impact.

Speaking about Nketiah in October, Arteta praised his work ethic and standards in training.

'I always have no doubts with him because of the way he trains and performs,' said the Gunners' boss.

'His goalscoring record is getting better and better every week.

'He's evolving the right way and this is what we need, players challenging and knocking on the door to become starters for us.'

There is no doubt Nketiah will have a point to prove when he returns to face Leeds on Sunday.

And there is every chance he could be handed a start with Alexandre Lacazette out of form. Arteta will also know that he will be desperate to show Bielsa just how much he has improved in the last 12 months.