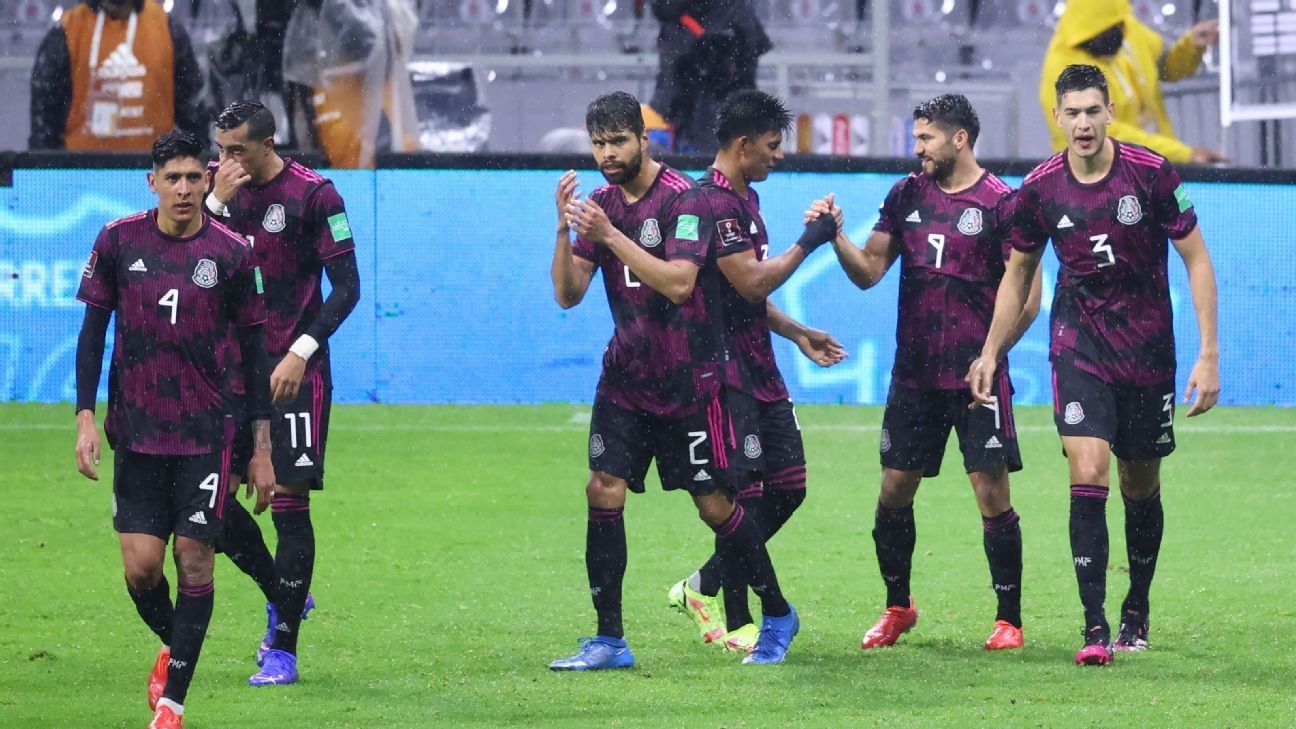 Although earning a place in the 2022 World Cup remains a likely proposition for Mexico men's national team, losses in November qualifiers against the United States and Canada have turned a potential cake-walk through CONCACAF's Octagonal round into a precarious one.

The good news is that two months have now passed since those defeats. In what has presumably been a long winter, El Tri manager Gerardo "Tata" Martino and his staff have had ample time to think through their missteps and miscalculations that carried them to a discouraging end to 2021.

As opposed to distancing themselves from the pack in the Octagonal, El Tri put themselves in the middle of a tight race that has a two-point difference between first-place Canada (16 points) and fourth-place Panama (14 points). Currently sitting at third with 14 points, there are no guarantees that Mexico will claim an automatic invitation to Qatar within the top three in the Octagonal, or even a playoff spot in if others below begin to pick up their pace.

Tl;dr: No time to waste for Martino in the last two international windows.

Ahead of decisive fixtures against Jamaica (Jan. 27), Costa Rica (Jan. 30) and Panama (Feb. 2), here are three storylines to watch for Mexico.

All three of Mexico's matches in this window will have no fans in attendance. Hector Vivas/Getty ImagesAmid chant punishment, an empty Azteca awaits El Tri

When Mexico travel to Jamaica's National Stadium in Kingston, they'll be met by a vacant venue that will be closed to fans due to local COVID-19 protocols. Barring last minute changes, this will mean that both matches between these two teams will have been played without fans after Mexico's 2-1 win over the Reggae Boyz last September in an empty Estadio Azteca.

That said, the Azteca wasn't previously unoccupied due to COVID-19 restrictions. Following anti-gay chants heard during Olympic qualifers in Mexico last March, FIFA imposed a two-game stadium ban that was later reduced to one for that September match against Jamaica.

Months later, Mexico continue to battle with the consequences of offensive fan behavior. After being given another two-game ban for additional instances of the anti-gay chant during October qualifiers against Canada and Honduras, Mexico won an appeal in January by the Court of Arbitration for Sport that will allow them to reopen the Azteca with a limited capacity.

In the upcoming qualifiers against Costa Rica and Panama at home, the Mexican Football Federation (FMF) will keep attendance to just 2,000 to allow for testing of new fan behavior measures. Mexico federation president Yon de Luisa outlined a plan last week that will include online ticket registration, a push for more positive fan experiences, heightened stadium security and a five-year ban for supporters who partake in the anti-gay chant at Mexico matches.

"These measures are based on four pillars and will be applied rigorously in all home games organized by the Mexican Football Federation," De Luisa said about the guidelines.

It's a welcome approach, albeit one that feels just a little too late from the federation that has waited years to enact strict regulations. In a best-case scenario in which the measures work in the matches with limited capacity, Mexico will only need to use them two more times in the last home qualifiers against the United States and El Salvador in March.

Nonetheless, the FMF will still want the Azteca to be filled as much as possible in those March games, for monetary and sporting reasons. They'll need to compensate for the ticket sales lost in February's qualifiers, and depending on how things go over the next few weeks, they might need to also potentially compensate for the points lost from the upcoming window that will have little-to-no supporters in the stands.

Marcelo Flores is a promising star, but he was not called up for the roster. Francisco Macia/Quality Sport Images/Getty ImagesMistake leaving Flores, Acevedo out of the roster?

Despite the fact that a total of 30 names were included in Mexico's packed roster, it's not difficult to make the case for at least a couple of names that have been overlooked.

The absence of Arsenal up-and-comer Marcelo Flores is the most glaring omission. The 18-year-old, who made his El Tri debut during December's 2-2 friendly draw with Chile, is widely seen as the next great superstar for Mexico. Creative, agile, and with excellent finishing abilities, the teenager has thrived in Arsenal's youth setup and appears destined to make his English Premier League debut soon.

Even so, "patience" is the word that Martino has often used when discussing Flores. The manager has the right to not be overzealous and immediately bring him back in, but if Mexico have more questions than answers in the winter qualifiers, he might be kicking himself for not taking a chance on the player. More importantly, he might regret it down the line if he loses the teenager that is also eligible for Canada and England.

Mexico fans are also justifiably scratching their heads about the goalkeeper list that contains 34-year-old Rodolfo Cota, 35-year-old Jonathan Orozco, 36-year-old Guillermo Ochoa and 39-year-old Alfredo Talavera. Experience is key for World Cup qualifying squads, but it remains odd that even the backups in this position are in their mid-30s.

It's not as if there are no young alternatives either. In the Chile friendly last month that featured several fringe players and young options for El Tri, 25-year-old goalkeeper Carlos Acevedo was easily one of the standouts. Outside of LA Galaxy's Julian Araujo, who is included in the current Mexico call-up, Acevedo was the most impressive player for Mexico from the match with Chile.

In Liga MX play, the Santos Laguna captain has also been exceptional over the last couple of years. Acevedo may not be above someone like Ochoa, but in a three-game international run, he is worthy of an opportunity over the other veteran goalkeepers.

Gerardo Martino's squad is packed with playmakers, but the defense remains a sore spot. Jason Franson/The Canadian Press via APResolving the backline must be a priority

There's enough firepower in the attack for Mexico to score some goals and there's an adequate amount of midfield talent to dictate the pace of the game, but what about the defense?

When attempting to identify a weak-link in Tata's setup, the backline is an immediate place of concern. Results in late 2021 highlighted Mexico's problems in this area. In all competitions, the team allowed nine goals in their last four matches. Following that last appearance, the aforementioned friendly draw with Chile, Martino stated that "our objective and challenge is to find a defense that lives up to how we attack."

Some solutions are there with the inclusion of Araujo at right-back and Genk's Gerardo Arteaga at left-back, the latter who is back in the mix after being reportedly left out for months due to previously turning down a call-up from Martino. In the heart of the defense, Genoa's Johan Vasquez and Monterrey's Cesar Montes are reliable enough to help bolster Mexico's own half of the pitch.

Gerardo Arteaga is reportedly back in the good graces of Gerardo Martino. Rich von Biberstein/Icon Sportswire

Unfortunately, after those names, there are several question marks hanging above other players who will be involved in the upcoming three-game stretch. In the fullback positions, Jorge Sanchez, Luis Rodriguez and Jesus Gallardo have all looked far from their best for club and country. Centrally in the backline, Nestor Araujo, Hector Moreno and Julio Cesar Dominguez have yet to establish a trustworthy partnership with one another.

Finding the right combinations, and also hoping for some of these names to step up, will be necessary for Mexico's success.

Much-needed points are within reach for El Tri, but if they stumble, they might find themselves in the same position from 2013 that saw them squeeze into the 2014 World Cup thanks to some devine intervention.